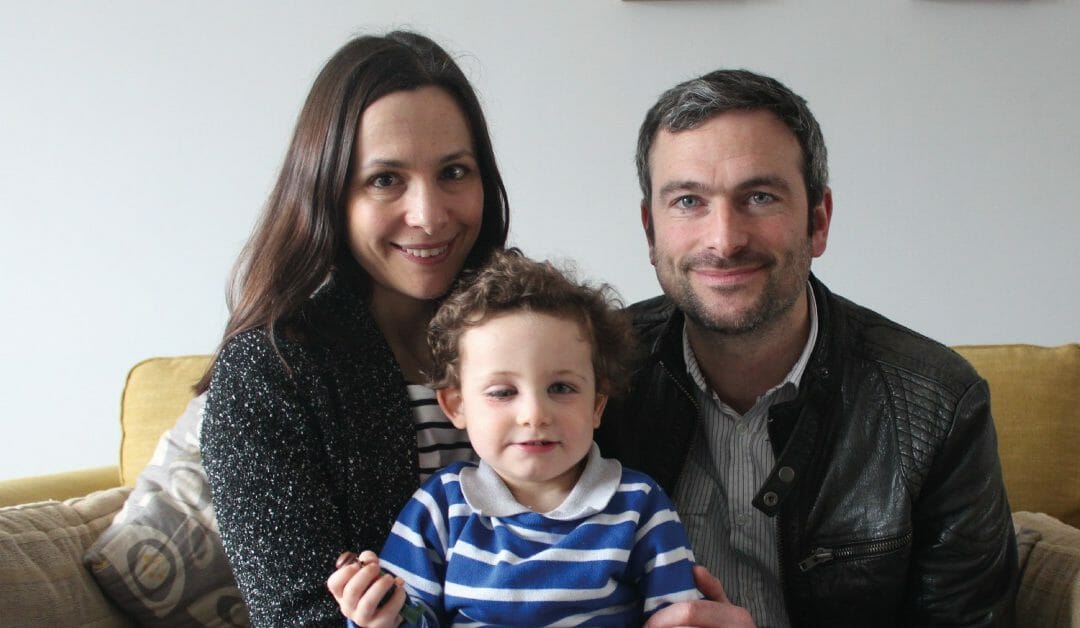 West Midlands parents James Rushton and Sally Nutt began to notice a strange ‘white glow’ in the right eye of their two-year-old son Oliver, although it only appeared in certain light. 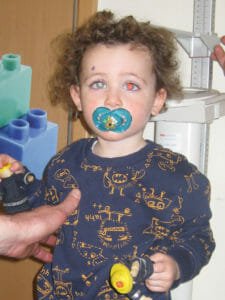 James was due to have a routine contact lens check at Specsavers in Wolverhampton, but decided to book Oliver in to have his eyes checked as well – just to be sure. However, when the optician carefully studied Oliver’s eyes, they recognised that something was very wrong and that Oliver should be seen immediately at New Cross Hospital in Wolverhampton.

James said: “Looking back, I didn’t even make my appointment. Sally rushed home from work and we were seen in the hospital the same afternoon.”

Doctors at New Cross discovered that Oliver could hardly see out of his right eye. Concerned, but also unsure of the cause, they referred the family to Birmingham Children’s Hospital where they were seen the very next day.

James said: “We did what you’re always advised against doing – we Googled Oliver’s symptoms and that’s when we first heard of retinoblastoma. Needless to say, we had a sleepless night.”

Retinoblastoma is a rare and aggressive form of eye cancer which normally affects children under the age of six. Sometimes symptoms can be subtle, often presenting themselves as a squint (lazy eye) or ‘white glow’ in the eye under certain lighting conditions.

Sally added: “We were completely clueless about retinoblastoma up until that point – your brain goes into overdrive. And even then, you don’t think it could be cancer.”

Birmingham Children’s Hospital doctors were still unsure, but a possible diagnosis of retinoblastoma or Coats’ disease were mentioned – both of which can be life-altering. Awaiting a further appointment the following week, the couple went into work the next day and James dropped Oliver off at nursery as usual.

James said: “Our nursery worker greeted us saying ‘Hello Oliver are you feeling any better?’, expecting a little snively nose…oh that set me off! So I then had to explain everything – that we were waiting to find out if Oliver had cancer or not.”

Doctors confirmed what Sally and James were dreading– Oliver had retinoblastoma and the tumours were at an advanced stage.
Sally said: “We decided the kindest thing to do would be to have the eye removed. It was a heart breaking decision that no parent should ever have to make – you don’t ever anticipate part of your child being ‘removed’ for any reason.

“We’d sort of already come to that decision that by the time we’d seen the doctor – they confirmed that removing the eye would be their advice given the advancement of Oliver’s tumours. We could have had chemo only to find that they eye would have likely needed to be removed anyway.”
Six months since his operation, Ollie is now back to his happy, lively self and is thriving at nursery. He has check-up appointments every eight weeks and now has a prosthetic eye which has been custom-painted to closely match his other eye.

In a message to other parents, Sally said: “Trust your instincts. If you are in any doubt at all about your child’s eyes, take them to your local opticians for a check – Specsavers were amazingly helpful and acted so rapidly.”

Patrick Tonks, Chief Executive of the Childhood Eye Cancer Trust (CHECT), said: “Retinoblastoma is rare, with around one child in the week diagnosed in the UK each year.

“Currently half of diagnosed babies and young children lose an eye to save their life. Urgent referral and early diagnosis can help save a child’s sight, eyes and life. In Oliver’s case, the optician took the correct course of action which led to a speedy diagnosis. However we are aware that families are sometimes turned away by their optician, advising that their practice does not see very young children and babies.

“We urge all parents and opticians to be aware of the symptoms and to have a child checked if there are any concerns at all – the most common signs are a white glow in the eye which visible in certain lighting or a flash photo, or a squint (lazy eye).”

To show their support for CHECT, the family have participated in various fundraising events, including taking on the Three Peaks Challenge in June raising over £3000 – for which Oliver joined them on the leg up Snowdon.

Furthermore, Specsavers Wolverhampton, who were touched by Oliver’s story, have named CHECT as their charity of the year for 2019.