“I was gently reminded, ‘You have saved his life’. ” – mum shares her family’s story 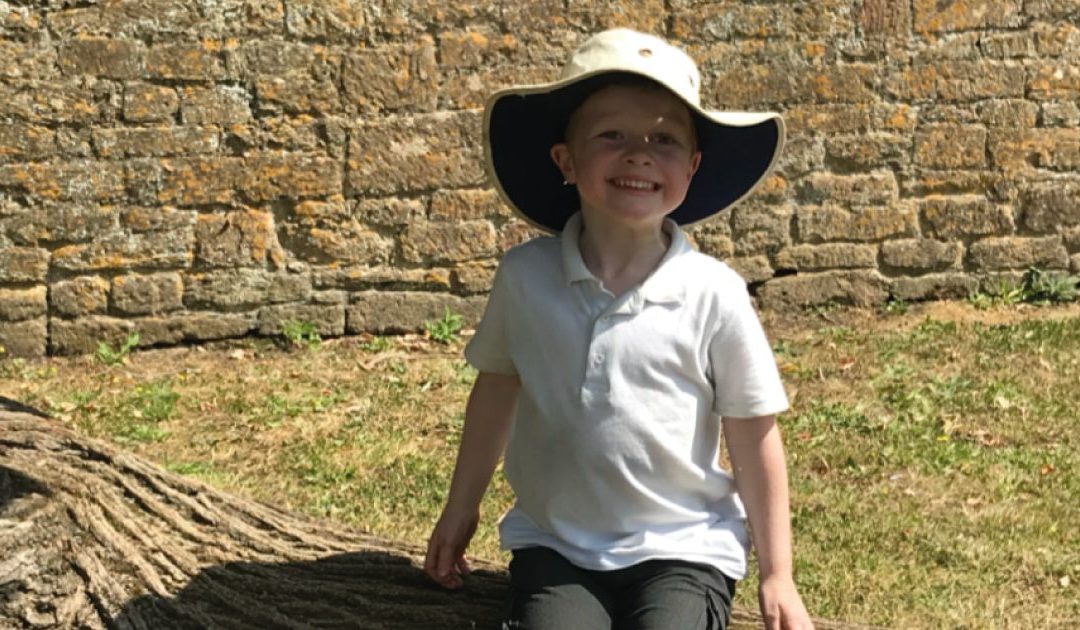 Charlie’s son James was diagnosed with unilateral retinoblastoma at two years old. As a result, his left eye was removed (enucleated) to stop the cancer from spreading. This blog may be helpful to other parents who are facing the prospect of having their child’s eye enucleated to treat their retinoblastoma.

I first noticed a difference in our son’s eye a little before his second birthday.

It was almost nothing, but one night after his bath, James was wriggling and giggling as he usually did. It seemed like I could look into his eye forever, as though his pupil had no end. For weeks I’d look but I never saw it again. But early in the new year, after James had turned two, I did see the infinite darkness that I had seen that one time before. We saw a GP and a referral was made, however I had a feeling that I shouldn’t be waiting – so I didn’t – and made an appointment for James to be seen at our local opticians.

James was seen initially at our local opticians at the end of January, and then two days later at the hospital’s ophthalmology department who made an urgent referral to the Royal London Hospital. We received a call the next morning advising they had a cancellation and to bring James in that afternoon. 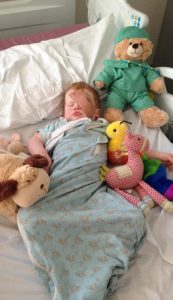 James in his hospital bed recovering from surgery.

Feeling incredibly anxious and putting on the best brave face I could, we travelled into London on the train. Such an adventure, and a challenge to keep James entertained without food for the afternoon. The nurses that greeted us were amazing: bubbly, factual, all about James. “How much fun was the train?”; “Shall we find toys to play with?” whilst I filled in paperwork, answered questions with my brain fuzzy and numb, and with my list of questions folded up on a piece of paper in my pocket.

James had everything explained to him by the nurses and play specialist. Even at his very young age he was more aware than I had realised. I will never forget James being asked if he had a poorly eye like Dino the toy. He said “Yes this one” and pointed to his left eye. It was shocking and scary to discover at this stage that James no longer had sight in his left eye, as he wasn’t falling over any more than normal, or bumping into things.

That same afternoon James was given a general anaesthetic. The consultants examined him and after the longest 40 minutes he was back in my arms, waking up and wanting the jelly he had been promised. Later that day as other patients were starting to go home, I got my chat with the consultant and the team of doctors who had examined James. With compassion and precise answers to my questions, I was calmly told that James had unilateral retinoblastoma of the left eye, that it was already at grade E stage, so the best and only option we had would be enucleation (to remove his eye) to prevent it spreading further.

At this point, sat in a room where suddenly the walls felt closer and the lights a lot brighter, my world seemed to be falling apart. My heart was lodged somewhere in my throat and tears streamed down my expressionless blank face as I desperately tried to come to terms with what I was hearing. We slowly worked through my list of questions and we found plenty more to answer also. The plan of what was to happen next was starting to form in my mind. I was gently reminded, “You have saved his life”.

We went home with lots of information and were given several calls from the nursing staff over the coming days to reassure us and answer questions. James in the meanwhile was his happy-go-lucky self, back at nursery being a typical two year old. Two weeks later we were back at the hospital, given a side room and assured we wouldn’t have a long wait. I wasn’t sure if that was a positive or not. The idea of changing our boy’s appearance was terrifying, but not nearly as much as the thought of not noticing this strange blackness in his eye, which by this point had become white (which I now know to have been the tumour) and the unthinkable happening. In a strange way I found comfort in knowing that James couldn’t see out of his left eye. It helped me to understand we weren’t taking his sight, it was already gone. We really were saving his life.

James enjoyed playing in the playroom whilst we waited and it was a good enough distraction from him being hungry. A little after 4pm James went to down to surgery. I walked him down the corridor with the nurses and play therapist, blowing bubbles for him to chase and spotting the spacemen on the walls. James sat on my lap whilst he was administered his anaesthetic. This moment right here was the worse I’d felt through our whole journey (and it still is). Handing over my very asleep, tiny little boy to a team of green gown-clad experts, trusting them and kissing his forehead and telling him “Mummy will be right here when you wake up again”. It was hard to look at him and not let the tears coming flooding out.

What seemed like days later – in fact a couple of hours – we were taken to the recovery room to be by James’ side when he woke up. Which he did briefly and fell back to sleep. The surgery had gone extremely well and James and I were moved to the children’s ward in the main part of the hospital to stay the night. The nurses reassured me that by the morning he would be asking to play in the playroom again. Lo and behold at 6.15 the next morning James was awake, asking for breakfast and to watch Peppa Pig. I was astounded by his resilience. He was dressed and playing in the playroom after breakfast, sporting his eye patch, ready to take on the world as he had done before.

Almost exactly 24 hours later James’ eye patch was removed and we couldn’t have hoped for anything better. He had no swelling or bruising. We were told it may take some time for his eyelid to open, but with those words he opened his eye. The relief was immense for me. I don’t know what image I had conjured up in my head to prepare myself for the unknown, but apart from being not quite the same colour his eye looked as it had before. 45 minutes later we were on our way home.

The next two weeks were agonising – the waiting to hear if the cancer had been removed, had it spread anywhere else. There were certainly some tears and some less sleep. But James kept us going. We had our little boy, he was here, he was alive, he was a survivor. Our news was good: no signs of any cells migrating to other parts of his body. Genetic testing showed us this was just a bad cell, in a bad gene, and that the likelihood of it reoccurring were the same odds as before. He had done it. Our little warrior had shown this cancer he is tougher, stronger and not to be messed with.

Six weeks later we had our first appointment with the National Artificial Eye Service for James’ conformer (artificial eye with a small hole fitted during surgery) to be removed and his first eye to be fitted. It was a bit of a battle of wills – I won’t lie – but James enjoyed helping to choose the best colour match and was fascinated by the process. The relationship between James and his prosthetist has continued to grow and James has a trusting and honest relationship with him. A couple of months later, James received his first moulded eye. This was a huge milestone for us. James had developed a notion of not wanting to give up his prosthetic eye in case he didn’t get it back. As children grow, the questions they ask mature as they do. We chose to be completely honest with James from the start, in the hope that he would know as he grew older that the answers we gave were truthful, even the difficult ones. 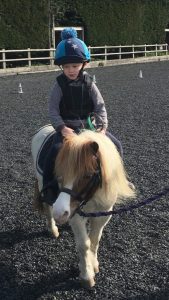 Riding horses is one of James’ many hobbies.

James forever goes on to show us how incredible he is. Now in his second year of primary school he is full of life and such a character. He loves swimming, being in the sea, riding his bike, climbing trees and riding ponies. He adores reading and being read to, he goes wild in the wind and embraces the outside elements. Maths is his favourite subject at school (at least this week), he is Lego bonkers and is as daring and courageous as my nerves will allow! We have learnt so much on our journey. Whilst our Rb story wasn’t one we would have picked, we are thankful for the treasures it has allowed us to see, for the support we have been given and for the lifelong friends we have made. No-one chooses this, but I’ve learnt we are never on our own, and that the support is unconditional throughout.