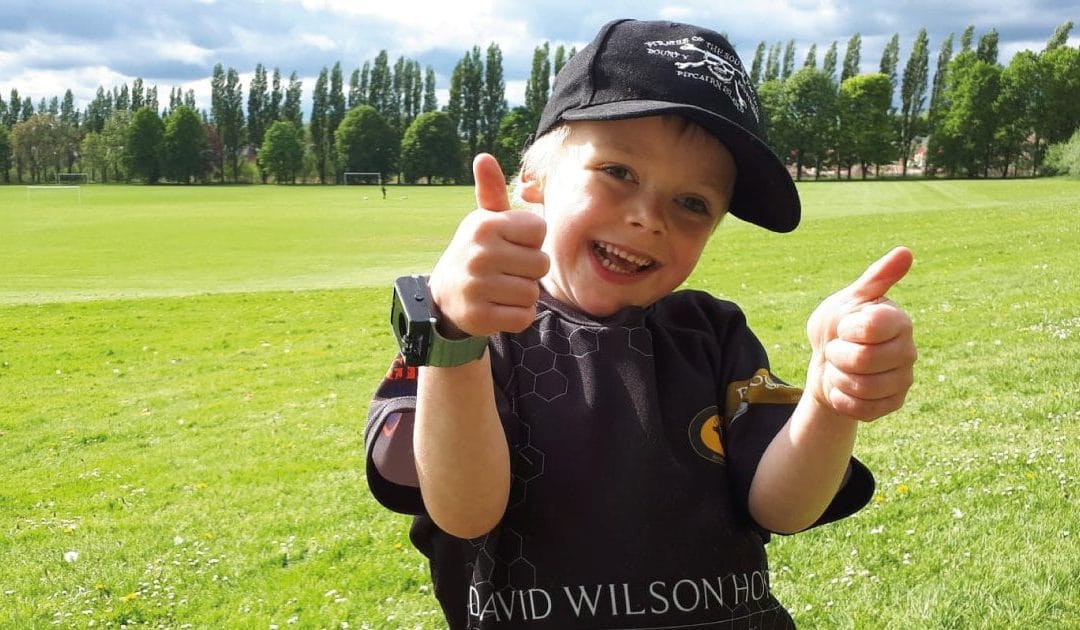 Mum Michelle tells us about her son Matthew’s retinoblastoma journey – from his diagnosis, to having his eye removed (enucleated) and later treated with chemotherapy to combat the remaining cancerous cells. This article may be useful for parents also facing a retinoblastoma diagnosis who would like to hear about another family’s experience of chemotherapy.

We thought we saw something in Matthew’s left eye, but as it wasn’t constant, we thought nothing more of it – assuming it was our lights causing a reflection. Then one day his nursery teacher told me Matthew had something in his eye and that I should get it checked out.

The next few days were a whirlwind of failed attempts to get Matthew seen by our local optician or GP. We then took him to a local minor injuries unit and they were amazing. It was there that the Advanced Nurse Practitioner looked in Matthew’s eye and saw the white glow and urgently referred us to a specialist Ophthalmologist at a local hospital. A series of examinations followed which lead firstly to the revelation that Matthew was blind in one eye and then to a diagnosis of unilateral retinoblastoma. Matthew’s left eye was enucleated on Good Friday. I remember visiting friends a week after the operation, and Matthew running around as if nothing had happened.

Around four weeks later we heard that the enucleation had revealed that some of the cancer cells had been found near the optic nerve. They hadn’t gone too far, but Matthew would need four rounds of chemotherapy.

Ever since Matthew’s retinoblastoma diagnosis, we were half-expecting he would need chemotherapy, – but to finally receive that confirmation was shocking and sad. We moved into our local hospital’s care with a call from a lovely calm doctor who told us where to come, explained what would happen and that we would speak in more detail the next day. At that first consultation we discussed how chemo would work, as well as the fitting of the Hickman line. We also arranged for some pre-chemo tests.

Matthew’s first cycle of chemotherapy went well, and he wasn’t really affected at all. However, some unusual results from the pre-chemo tests meant that the second cycle was slightly delayed. This was a very tense time for us. Fortunately it was decided the results were not problematic, so we continued with the process.

Chemotherapy was not what I was expecting; I thought it would be a nasty process with lots of side effects. Matthew never lost his hair (we hadn’t cut his hair thinking he would lose it, but he never did, so it was a right mop by the end!), but he did lose his body hair. Our home care team were really nice, and Matthew loved both nurses who came on weekly basis to change his dressings and flush his line.

There was no sickness with the first cycle. After the second cycle Matthew was sick at the end of the day and a bit more tired – so the hospital wanted to keep him in to get anti-sickness meds in. Later in the process Matthew wouldn’t take any oral medication anymore. So from then on, he would have IV anti sickness meds in hospital before the chemotherapy, go home, and then be sick around 11pm. After that he would go straight back to sleep, and the next day be like nothing had happened. We managed it with cuddles and lots of changes of bedding!

We had two neutropenic (low blood count) episodes fairly late in the process, and each time we were in our local hospital for 48 hours with a high temperature. Neither of these episodes delayed the next round of chemo.

I would say to any parents starting their chemo journey to be aware of things such as sickness and hair loss – but not to expect them, as they may not happen. Everyone’s situation is different. Read about other people’s experiences, but don’t assume that the same will happen to you or put added pressure on yourself by worrying in advance.

Be aware that your child going through this may put pressure on your relationship, so be more understanding of each other and accept that you’re in this together.

Give lots of cuddles! If you need to be sad – be sad. You don’t have to be afraid of being sad in front of your child. You can let them know you feel really bad about what is happening to them, which in turn might unlock for them what is happening. Children have nothing to compare this to, and don’t necessarily know the language to explain how they are feeling.

Bring an element of fun to the ordinary, such as making the journey to the hospital more fun ­ – spot landmarks, turn finding parking a spot into an adventure.

While Matthew was having chemo he would be on the bed from 10.30am until 6pm so we would watch CBeebies and play apps on the iPad, bring Thomas magazines and books, and any toys he could play with on the bed.

We were fortunate that work on both sides were really supportive, and Matthew’s nursery was very sympathetic. They organised presents for Matthew and fundraised for CHECT. It was lovely – not too much –  just recognising Matthew had gone through something tough, with his friends sending little bits and pieces.

Chemotherapy was made easier for us as Matthew didn’t have too many side effects. My husband Ed took it hard, whereas I largely took it in my stride. Maybe it will hit me at a later stage. I was so immersed in cycles of doctors, nurses, hospitals, that once that all went after we finished treatment, I had a feeling of “oh gosh, we’re on our own now”.

Our hospital support finished a few weeks after the last chemo and after the Hickman line had been removed and healed. It is difficult when that support gradually goes, but we still had phone-calls from the home care team, telling us that we were now discharged, but with an open door. 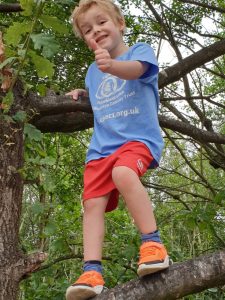 Soon after Matthew’s line came out he had a temperature. As he was no longer having chemo, we didn’t know whether we should go to hospital or not. The temperature wasn’t going down, so went in. The hospital told us we should have come in straight away, and that we still had six months’ cover with the team. It happened again recently, and team reassured us that we are not on the six months direct access anymore, and that we can treat a temperature as a usual fever now.

Gradually life returned to normal, with us returning to work and Matthew gradually doing more hours at school. Fast forward to today – Matthew is thriving in his Year 1 class at primary school.