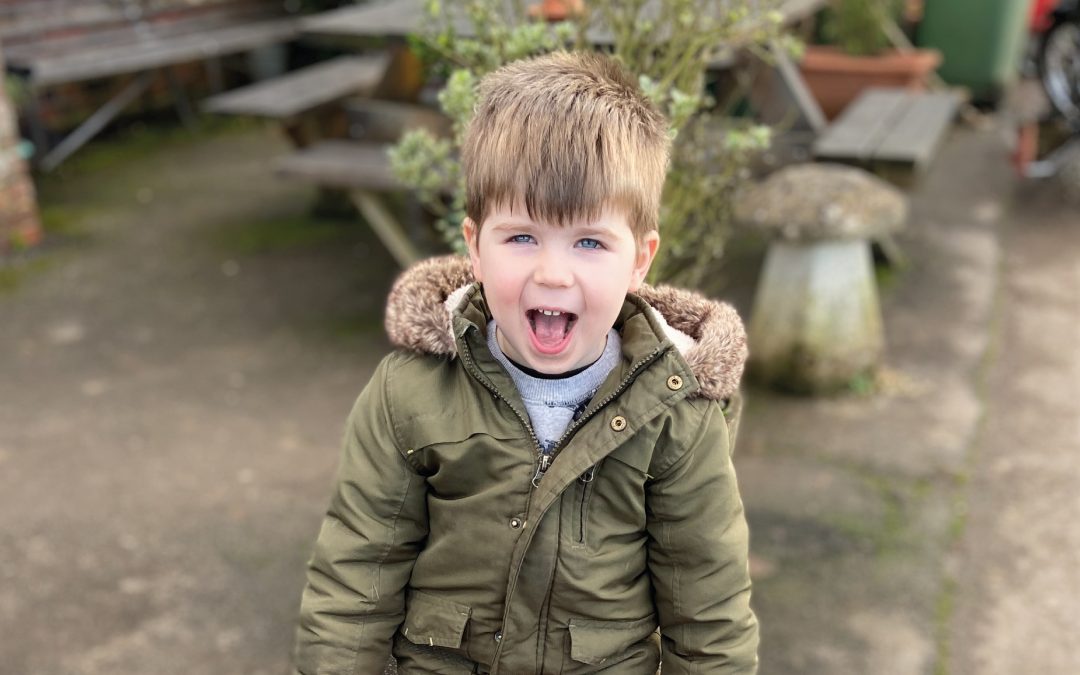 A four-year old boy from Fair Oak in Hampshire has received a prestigious award in recognition of the courage he has shown while battling against retinoblastoma (Rb).

Sebastian Burrell was diagnosed in October 2016 when he was just nine months old.

Tests revealed that Sebastian had cancer in his left and right eyes. Although subsequent treatment managed to save both eyes, he has been left with virtually no sight in his right eye which contained the largest tumour.

Sebastian’s left eye, through which he maintains relatively good vision, still contains a small tumour. However, with little or no change in the tumour’s size since 2016, and given the lack of vision in his right eye, doctors made the precautionary decision not to remove it but to monitor its progress instead.

Despite everything he has been through, Sebastian continues to live an active, happy life, playing with his friends at nursery and helping to care for his baby sister, Penelope (born in December 2019), at the home he shares with mum Pippa and dad Daniel.

In recognition of his outstanding effort and bravery, Sebastian – known as ‘Seb’ to his family and friends – has been named a CHECT Champion by the Childhood Eye Cancer Trust (CHECT) along with six other children.

The CHECT Champion awards aim to recognise the courage, resilience and patience shown by all children affected by retinoblastoma throughout treatment and beyond.

“The first indication that something wasn’t quite right was when we noticed Seb had a slight squint,” says Pippa. “He was five months old at the time and, fortunately, we decided to get it checked out.

“It was another four months before he was officially diagnosed with retinoblastoma, during which time we went from the first appointment at hospital in Winchester to seeing an ophthalmologist before being referred to Great Ormond Street Hospital in London.

“The doctors at Great Ormond Street had their suspicions about what is was, but it was only when we went to the specialist treatment centre at The Royal London Hospital that it was confirmed as retinoblastoma.

“Being so young at the time, Seb fortunately has no recollection of all the things he experienced during his treatment. If you saw him at nursery, playing with friends or looking after his baby sister, you wouldn’t know there’s anything different about him. But he went through the wringer, he really did. We nicknamed him ‘Super Seb’ because of the way he dealt with everything that was thrown at him. He’s been so brave.”

Sebastian – who continues to undergo checks every six months at The Royal London Hospital – has already received his CHECT Champion medal and a framed certificate in recognition of his immense courage in the face of adversity.

CHECT has three vital missions – to offer one-to-one support for families and individuals affected by retinoblastoma, to raise awareness of the signs and symptoms to prompt earlier diagnosis, and to help fund research into the disease.

“We are delighted to recognise the wonderful courage and resilience shown by Sebastian throughout his treatment. He really is a thoroughly deserving champion.

“While retinoblastoma is a rare cancer, we urge all parents to be aware of the symptoms and to have their child checked out if they have any concerns at all. The most common signs are a white glow in the eye which is visible in certain lighting or a flash photo, or a squint (lazy eye).”

If you are a CHECT member and would like to nominate your child, or their sibling, for a CHECT Champion Award, please get in touch with your CHECT Support Worker. We hold members’ days throughout the year all across the UK to ensure we give as many members as possible the opportunity to attend an event near them. Have a look at what happened at our members’ day back in January 2020.