Will Plant took part in the Roubaix Challenge cycling event to raise money for the Childhood Eye Cancer Trust after his son Benjamin was diagnosed with bilateral retinoblastoma. He tells us how it went…

A Long Road To The Hell Of the North

In May 2013 our son Benjamin was diagnosed with bilateral retinoblastoma.

However Benjamin has retained excellent vision in his left eye and is an amazing, healthy and robust little boy of four, getting on with life.

His condition is stable and we are currently on six-monthly gaps between check-ups at the Royal London Hospital.

So all this meant that I now had time to get myself ready for a ludicrous charity challenge in order to raise money for the Childhood Eye Cancer Trust (CHECT).

As a bit of a born-again cyclist and probably verging into the MAMIL (middle aged man in lycra) demographic it had to be a cycling challenge. I also dragooned my friend Owen Killmister into riding with me as he’d already ridden London to Paris for CHECT.

The Paris-Roubaix cycling race is perhaps the pre-eminent early season one day race. One of the “Classics” or “Monuments” of the cycling world it is best known as “L’Enfer du Nord: the Hell of the North” because of the long sections of cobbled roads that form part of the course.

The cobbled tracks are terrible surfaces on which to ride a bike and are restricted to agricultural vehicles for the rest of the year. If the weather is dry then it gets incredibly dusty, if it is wet (and after all this is the first weekend in April in Northern France) then it becomes very muddy and slippery.

Riding the Roubaix cobbles has been likened to trying to ride a washing machine full of bricks whilst it is on spin cycle.

So what really makes the Roubaix Challenge even harder? How about cycling to Roubaix from London beforehand! 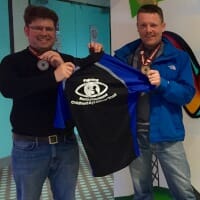 The roll out from Croydon was pretty hard for me, busy traffic and hills, plenty of hills. Plus the time pressure of making sure that you get to Dover in time to catch the ferry.

Looking back on the stats for the day it was the longest day I had done in the saddle with the largest amount of climbing. But we made the ferry in good time and the seven mile dash to the hotel across Calais in the dark was fun apart from the tiny hill right at the end that seemed a final cruelty to my tired legs.

The second day was a more straightforward proposition with no particular time pressure and it was mostly, apart from two steep hills, flat.

Our group of more than a dozen lycra-types got a few looks as we made our way through the town of Watten, as the main street had been closed to traffic for market day.

A three course lunch got the energy levels up as we made our way through the quiet countryside. A visit to the small, beautifully kept and tranquil First World War cemetery at Le Trou Aid Post was a powerful reminder of the area’s history.

Cycling into Lille during rush hour was made significantly easier because of the cycle lanes and other infrastructure to support pedal powered transport.

Day Three – Roubaix Challenge approx. 86 miles of which 18 miles are on cobbles!

The third day was a slightly easier start for us at 7am than some, as we’d signed up for the medium Roubaix distance rather than the longer version. Those on the longer version had to leave Lille painfully early in time to be at Roubaix for 5am to get the coach to the start.

I got a bit more than 50km into the Roubaix Challenge itself and onto the infamous Arenberg Forest section of cobbles which is probably in the worst condition of all the cobbled sectors.

About halfway along (and despite all my precautions with tyre pressures) I had a massive blowout in the front tyre by hitting a very large hole, or perhaps gap between two cobbles, I am not exactly sure.

I managed to get off the course and over the pedestrian barrier to get out of the way of the 5,000 other people doing the event. I changed the inner tube before I realised that the blowout had put a hole in the sidewall of the tyre.

To give you an example of just how treacherous the conditions were about one person a minute was crashing/falling off just in the section next to me whilst I was changing the inner tube.

I walked to the end of the Arenberg hoping to find some mechanical backup but there wasn’t any so I had to call for the broom wagon to get me back to Roubaix. Annoyingly after I’d waited for more than an hour a mechanical support van did turn up and offered to change the tyre but by that point I’d got cold waiting, had sent my friend onwards, and effectively run out of time to complete the rest of the course before the time cut-off.

When the broom wagon did turn up it was driven by a slightly crazy Belgian, and at points I felt that it might have been safer to take my chances on the cobbles. 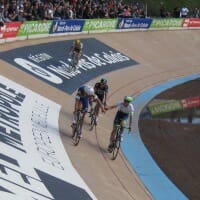 We watched the professional race on the Sunday which was excellent, and it was amazing being in the velodrome to see the exciting finale of one of the closest races for years.

Would I recommend the Roubaix Challenge to others thinking about it?

Yes, particularly if you have already completed a multi-day cycling challenge and are looking for a new challenge. This was my first challenge and although I had done a lot of fitness work in all weathers over the winter I could have been fitter especially for the pressure of the first day.

One of my fellow riders, a strong club rider, who did the long route said it was harder than the Etape Du Tour, and the Global Adventure Challenges crew felt it was the hardest single day cycling challenge they offer and that’s before you cycle London to Lille on previous two days.

The cobbles are ridiculously hard, way harder than the professionals make them look on TV. The greater majority of the group I cycled with fell off at some point on a cobbled section.

Most people who completed the course that day immediately said “never again”. If you are a cycling fan then the chance to watch the professional race in the velodrome is a brilliant opportunity.

My sponsors were happy with 200 miles in two and a half days even if I didn’t quite get around the final two thirds of the Roubaix Challenge itself.

If you’d like to do a fundraising challenge we’d love to have you on Team CHECT. We have places on walking, running and cycling events throughout the year. Have a look at our fundraising pages to find out more.