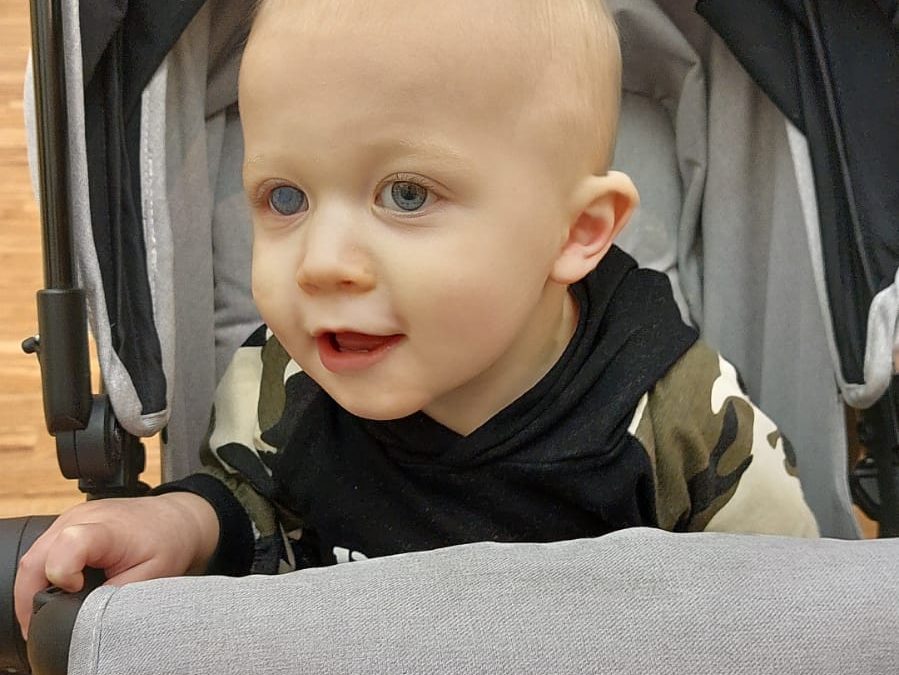 A mum and dad from Bolton are urging other parents to look out for the tell-tale signs of eye cancer for World Retinoblastoma Awareness Week, after their 11-month-old son lost his eye through retinoblastoma, a rare eye cancer that typically affects children under the age of six.

Parents Natasha and Alex Finney first spotted an unusual cloudiness in their then eleven-month-old son AJ’s eye in November 2021.

Natasha said, “While changing AJ’s nappy, he cried a lot. When he got up, taking his first steps in the process we were over the moon, but then we noticed a cloudiness in his eye and decided to get him into the doctors that day. We weren’t aware of retinoblastoma before AJ was diagnosed, so we wouldn’t have known any typical signs or symptoms of it”.

Typical signs of retinoblastoma include a white glow which may only appear in certain lights or a squint, as well as a change in the appearance of the eye or a swollen eye, although often only one sign or symptom is present.

Natasha explained, “Although AJ had a visible squint quite early on, we weren’t concerned as Alex and his mum also have a slight squint, so we assumed it was hereditary.  Since AJ’s diagnosis, we have discovered that a squint is the second most common sign of retinoblastoma”. 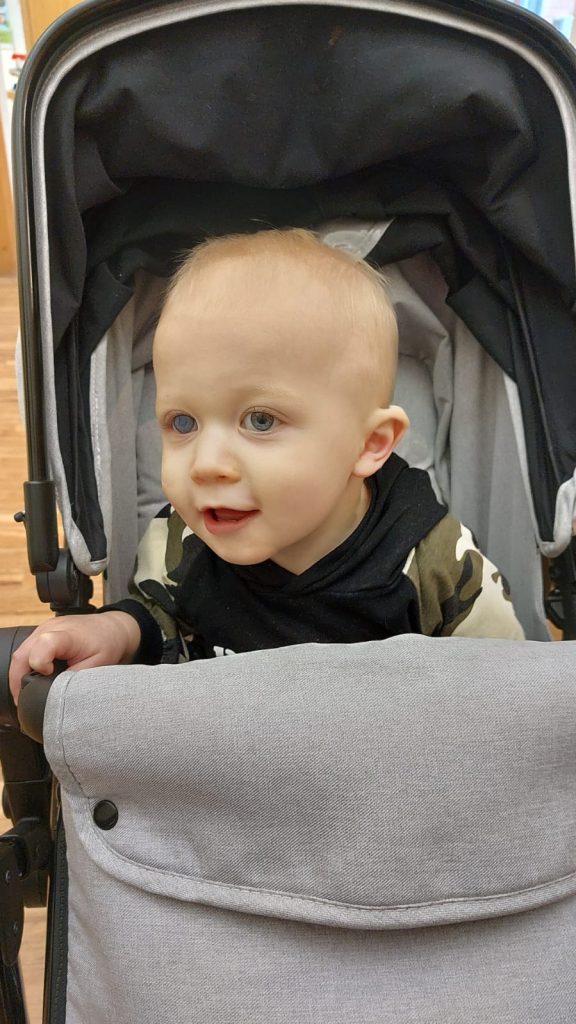 AJ had a cloudiness in his eye

Natasha said, “I was at work while Alex took AJ to the doctors so when he rang and said that he needed to take AJ to the hospital, I panicked.”

AJ was referred by the hospital to a specialist eye hospital the next day, where he had vision tests, pressure readings and ultrasound scans.  The consultant revealed that they thought it could be retinoblastoma.

Natasha explained, “They warned us to not Google it, but on the way home, Alex and I decided that we needed to know more so we went straight to the NHS website to search what retinoblastoma was; the standout word was “cancer.” Our hearts sunk lower than we knew was possible, we were devastated”. 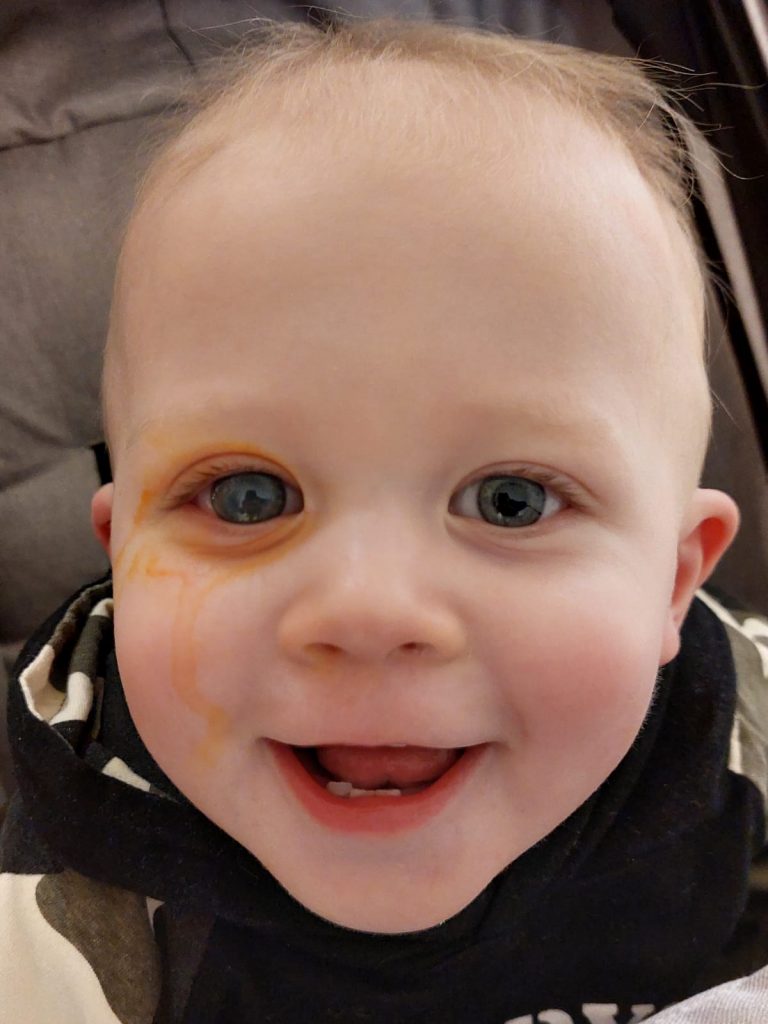 AJ had a swollen eye

The following week, the family travelled to the specialist retinoblastoma ward at Birmingham Women’s and Children’s Hospital to have AJ’s eyes examined under anaesthetic.

Natasha said, “The confirmation of AJ’s Rb diagnosis was immediately after – and we weren’t really given any other option other than removal of his right eye, purely due to the size of AJ’s tumour. Alex and I were devastated, and it took us a while to digest what we were being told.”

The day before his eye removal, AJ turned one. Due to travelling to Birmingham the next day, the family celebrated on his 13-month birthday instead. 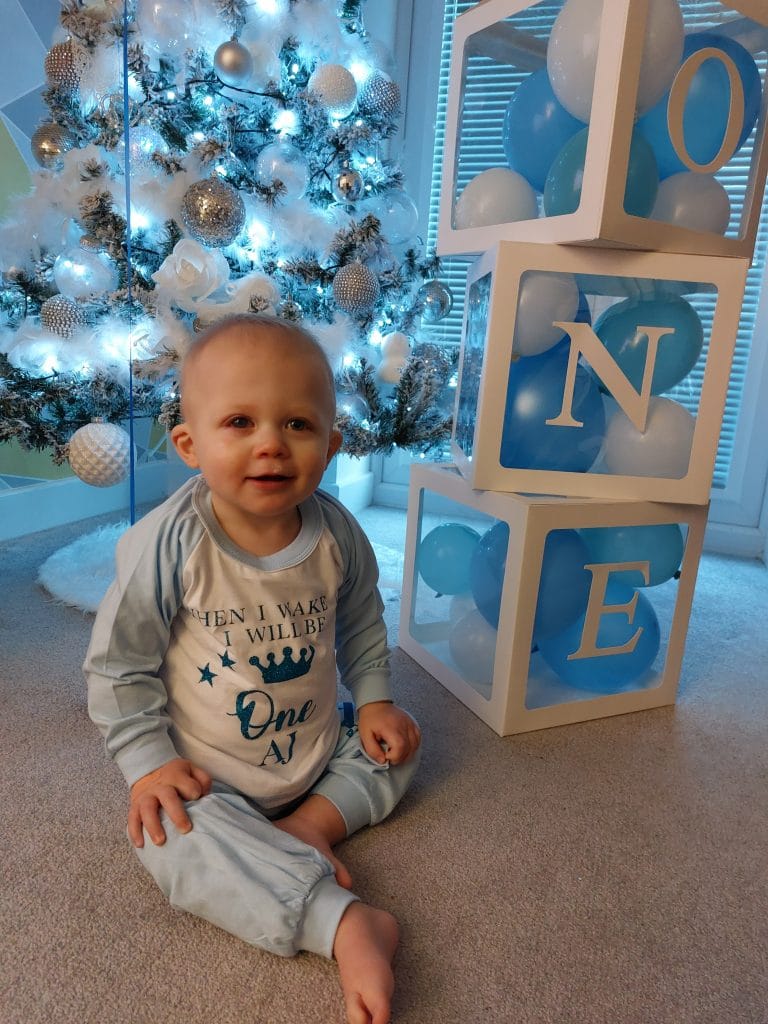 Natasha said, “On the day of the operation, we met with AJ’s surgeon, and he explained the procedure and really put us at ease. AJ’s operation took around three hours, which felt like the longest three hours of our lives! The surgeon performing AJ’s procedure came to see us once it was done and told us that it had been a success which was a huge relief! When we collected him from recovery, it was bittersweet as we were so excited to have him back with us, but equally it was hard to see him all bandaged up.”

AJ after his enucleation

Natasha added, “AJ’s recovery went really well, although it was tough because we stayed in the hospital for five days with him, working shifts between us as we were only allowed one hour per day together with him due to covid restrictions.

“Unfortunately, as AJ had been teething and snotty on the day of his operation, his eye socket became infected. His implant – which we nearly mistook for a bouncy ball – and his clear conformer which he had in his eye before his artificial eye, had fallen out. After another hospital trip, it was determined that AJ needed to have a dermis fat graft in April 2022, where they took some fat from another part of his body and inserted this into his eye to fill the socket space where the implant once was.” 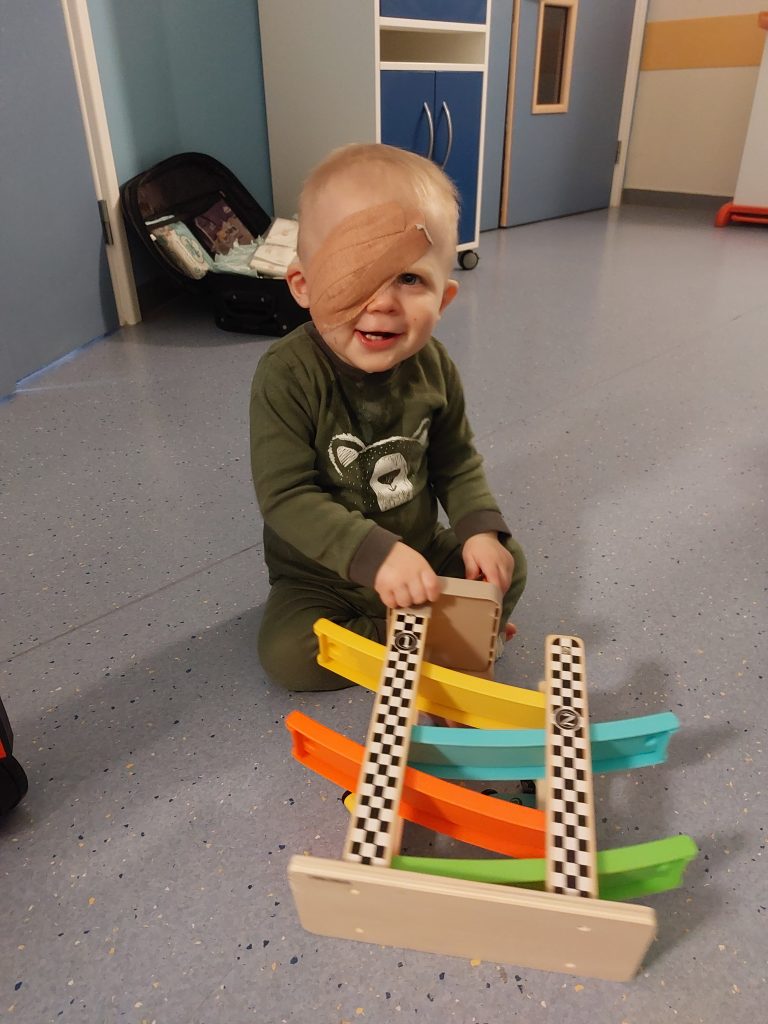 AJ playing after his operation

Natasha explained, “At first, I found it really difficult to accept that AJ would be going through his life partially sighted because whenever we were out together, the first thing that people would notice was ‘his beautiful eyes’ and although I knew that he would always be beautiful to our family, I became conscious that it wouldn’t be the first thing people noticed about him anymore. However, even now, people will comment on AJ’s beautiful eyes as well as his cheeky smile. As long as we know that AJ is happy, we are happy too.” 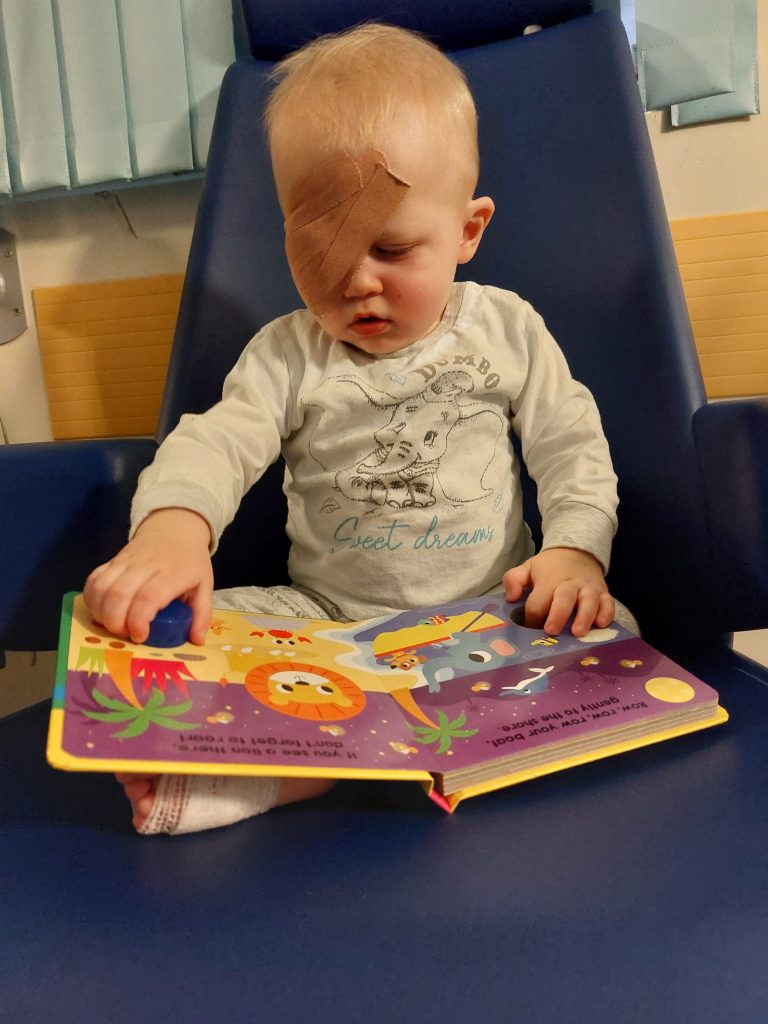 AJ reading after his operation

Natasha said, “People who are aware of AJ’s artificial eye are in awe of how alike it is to his left eye. On three separate occasions, kind strangers have also noticed a difference in his eyes and asked about them and been amazed when I’ve explained that one is an artificial eye. There has been however, one occasion, not long after his clear conformer had been fitted when a little girl commented on AJ having a “magic eye” – which I thought was beautiful. She then told her mummy and when questioned what she meant, the little girl said he had a normal pretty blue eye and a magic white eye as well. I was disgusted that the mother’s response was ‘eurgh’. I would encourage people to think about what they say because you never know what a family has been through and how your comments might affect them in a negative way.” 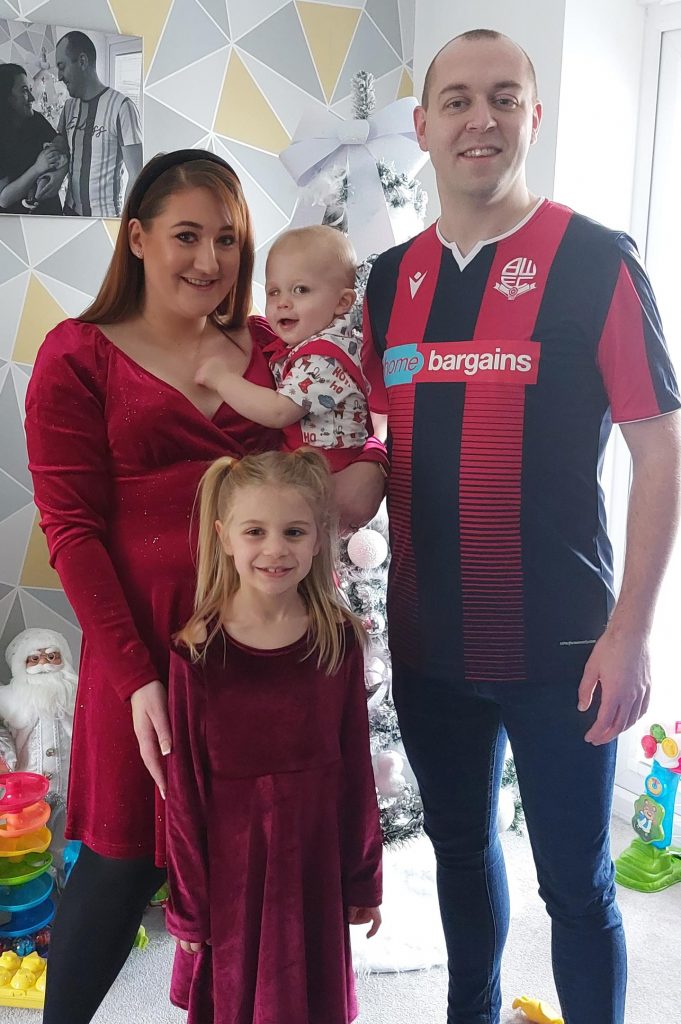 AJ with his family

AJ’s left eye is monitored for tumours, and so far he has received the all-clear.

Natasha said, “We feel extremely lucky that this is the case and that his left eye doesn’t need any further treatment at the moment but are extremely vigilant for any signs of changes within his left eye. When his vision was checked last, his left eye’s vision came back very strong but having vision in one eye only hasn’t seemed to affect him too much, but he bumps into door frames from time to time!

“He is very much a lefty now – choosing to do almost every one-handed task with his left hand but as this is the side where he has vision, we can understand that and are constantly tweaking our parenting to suit AJ’s needs, such as sitting him on our right knee to do peekaboo on his left hand side”. 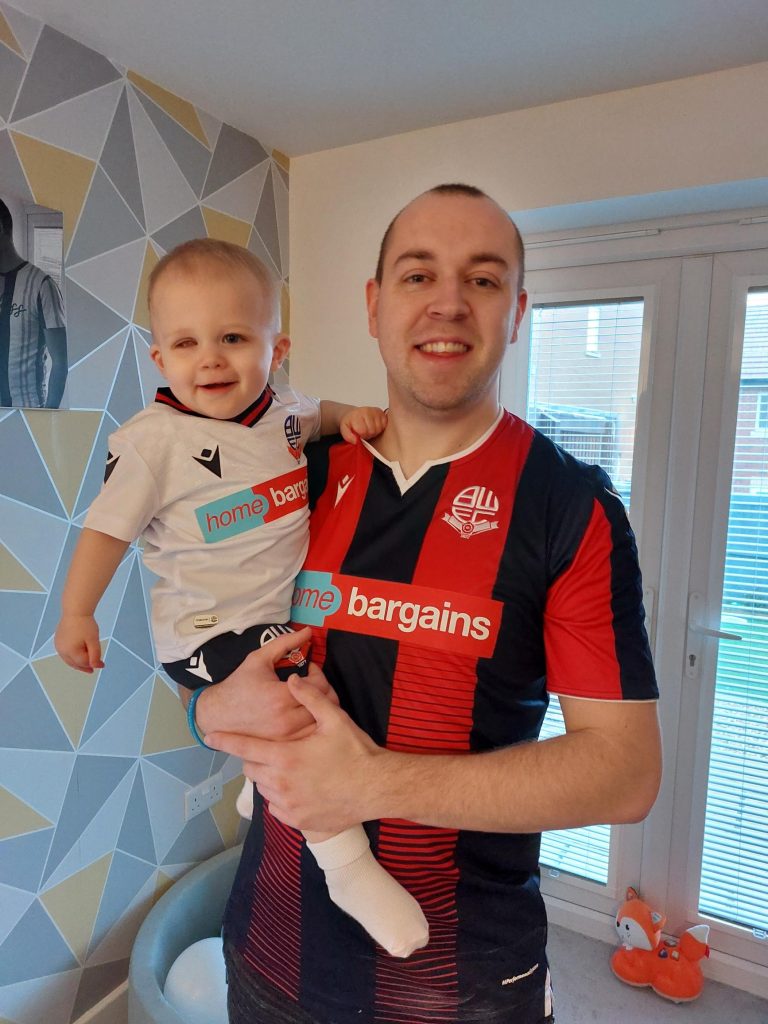 AJ with his dad

Natasha added, “As a one year old, AJ is a happy little boy who is now up on his feet, walking around everywhere and developing a cheeky, contagious personality day-by-day. He loves to clap hands and make a mess of the front room by emptying his ball pit, launching three balls across the room at a time – all 300 of them! He always has a smile on his face, especially learning new Makaton signs.”

The Childhood Eye Cancer Trust (CHECT) are urging parents and healthcare professionals to be aware of the most common possible symptoms of eye cancer – a white glow in the eye in flash photo or other certain lighting conditions and a squint.

Patrick Tonks, Chief Executive of CHECT said: “Retinoblastoma is rare, with around one baby or young child being diagnosed in the UK each week. Symptoms can be quite subtle, and children often seem well in themselves which can make it hard to diagnose. In just under half of all cases, such as in AJ’s case, a child has to have an eye removed as part of their treatment.”

Patrick adds, “We are extremely grateful that in AJ’s case, his symptoms were recognised, and an urgent referral was made so that he could receive treatment.” 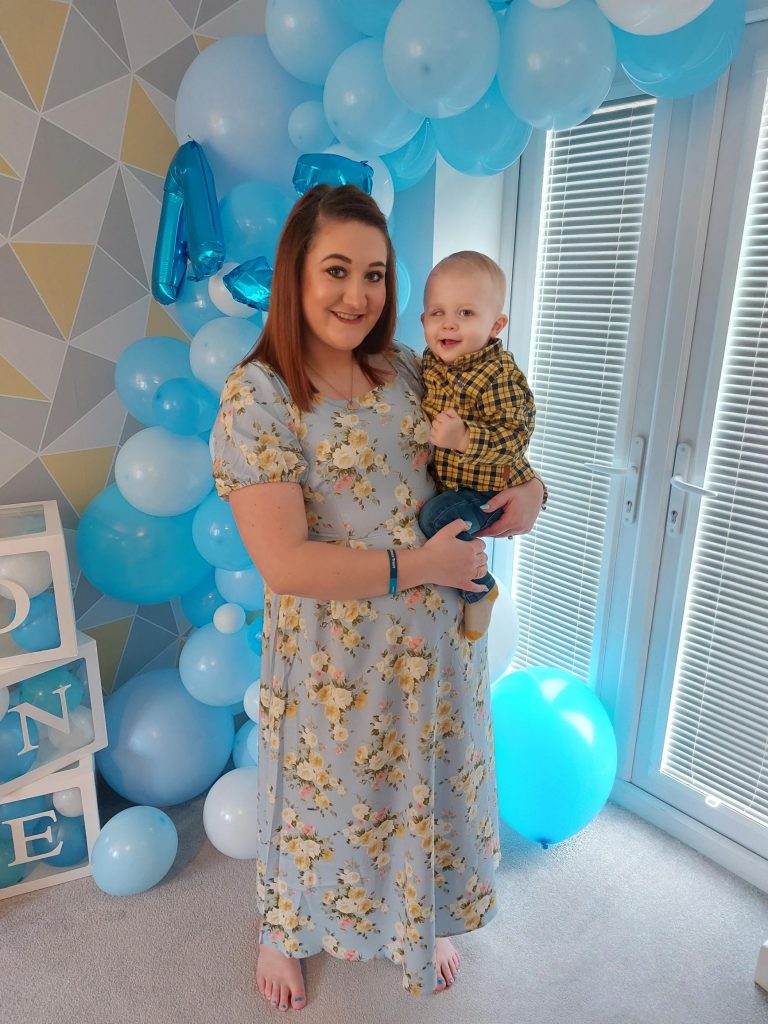 AJ with his mum

The family are hosting a charity evening during World Retinoblastoma Awareness Week – which takes place the 8th-14th May 2022.

Natasha said, “At the end of World Retinoblastoma Awareness Week, we are hosting a local charity evening where all proceeds will be split equally between CHECT and BWITC (Bolton Wanderers In The Community)”. 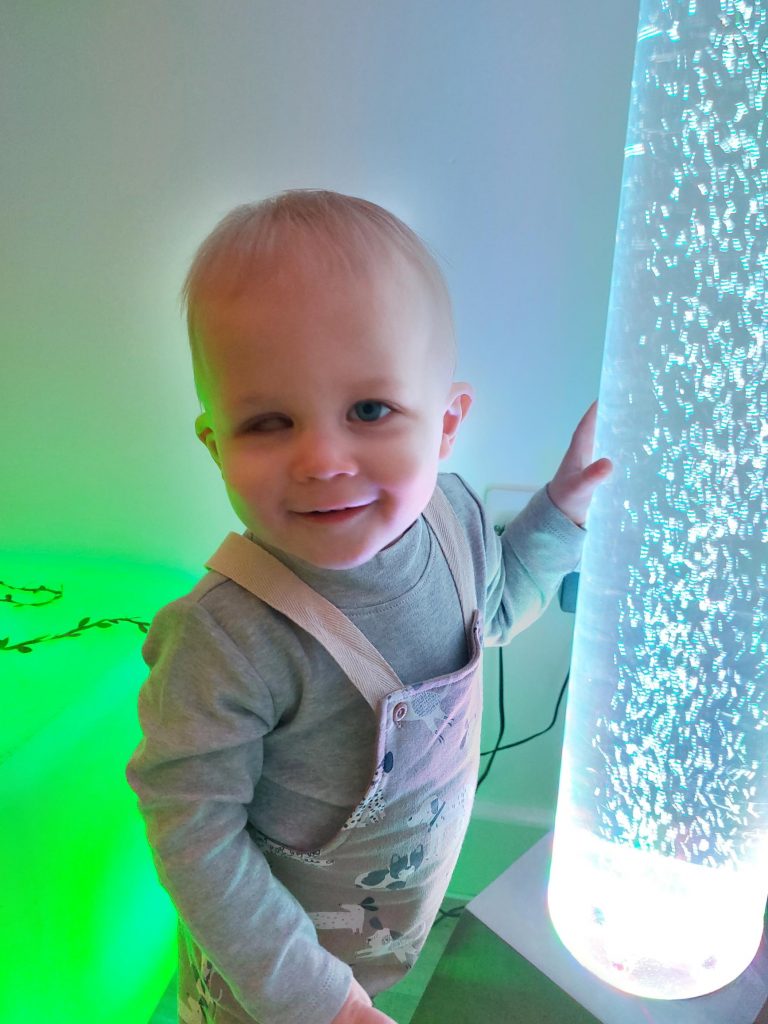 Natasha added, “We are forever grateful to the entire Rb team at Birmingham who have held our hand, been a shoulder to cry on, been a listening ear and been factual, yet sensitive, with us throughout. We would also like to thank the team at CHECT for also being the best support for us while we’ve been going through the most difficult time of our lives and for always being there at the end of the phone, just to listen and offer advice.”

In a message to other parents, Natasha said, “If anyone is worried that their child has retinoblastoma, please go to your GP as soon as possible but don’t panic. There are so many different scenarios when it comes to Rb and the treatment that AJ has received is completely different to that of other Rb warriors that we are now in contact with. The Rb community is strong and there is always someone there to chat to whenever you’re feeling lonely, worried or anxious”.

For more information on the signs, symptoms, and treatment of retinoblastoma, please visit chect.org.uk.