The drivers of a Peterborough taxi firm have raised nearly £3,000 in support of a local baby girl who is battling retinoblastoma.

Shabir Ahmed, manager of Peterborough Cars, was heartbroken when his beloved granddaughter Hawwa Amel Hussain was diagnosed with retinoblastoma earlier this year, aged just nine months. Now he has joined his family in raising funds and awareness for the Childhood Eye Cancer Trust.

During the World Cup football tournament each of the 160 drivers, office staff and some customers donated £1 every time England scored, with the company giving £10/ goal. Every time England made it through to the next stage, the company donated even more. The total raised was £2,870 which was donated to the Childhood Eye Cancer Trust in support of Hawwa, who has just had her fifth round of chemotherapy in a bid to shrink the tumour in her left eye.

Sunny Singh, the Operations Director at Peterborough Cars, said, “We do a lot of fundraising for charities throughout the year but this cause is particularly close to us as Shabir’s granddaughter is currently going through treatment for retinoblastoma. All of the drivers, staff and even some of our customers got behind the campaign, helping to raise maximum funds for the Childhood Eye Cancer Trust.”

Hawwa’s mum Aaliya Ahmed-Hussain, 30, from Dogsthorpe, said: “I first noticed Hawwa’s eye had a glassy look to it when she was three months old but we all assumed it was because her eyes were changing so quickly and it was nothing to worry about. But when she was eight months old she developed a squint and the glassiness that I used to only see in certain lighting was there more and more.”

Aaliya took Hawwa to the GP who referred them to Peterborough City Hospital for further tests. Within days the family were at the Royal London Hospital, one of two specialist centres for retinoblastoma in the UK, where the diagnosis was confirmed.

Hawwa, who has lost the sight in her left eye, has since had five out of six rounds of chemotherapy. She will then be examined again to determine what further treatment she needs.

Aaliya said: “The first cycle of chemo was hard – Hawwa was so poorly that we were in hospital for 19 days and she needed blood and platelet transfusions. We were worried that it was going to be like that every month but fortunately the later cycles went much better.

“Despite everything she’s been through, Hawwa is still smiley, bubbly and full of life. Apart from the hair and weight loss, you wouldn’t know anything was wrong. She is a typical mischievous baby who is always on the move and wants to climb everywhere.” 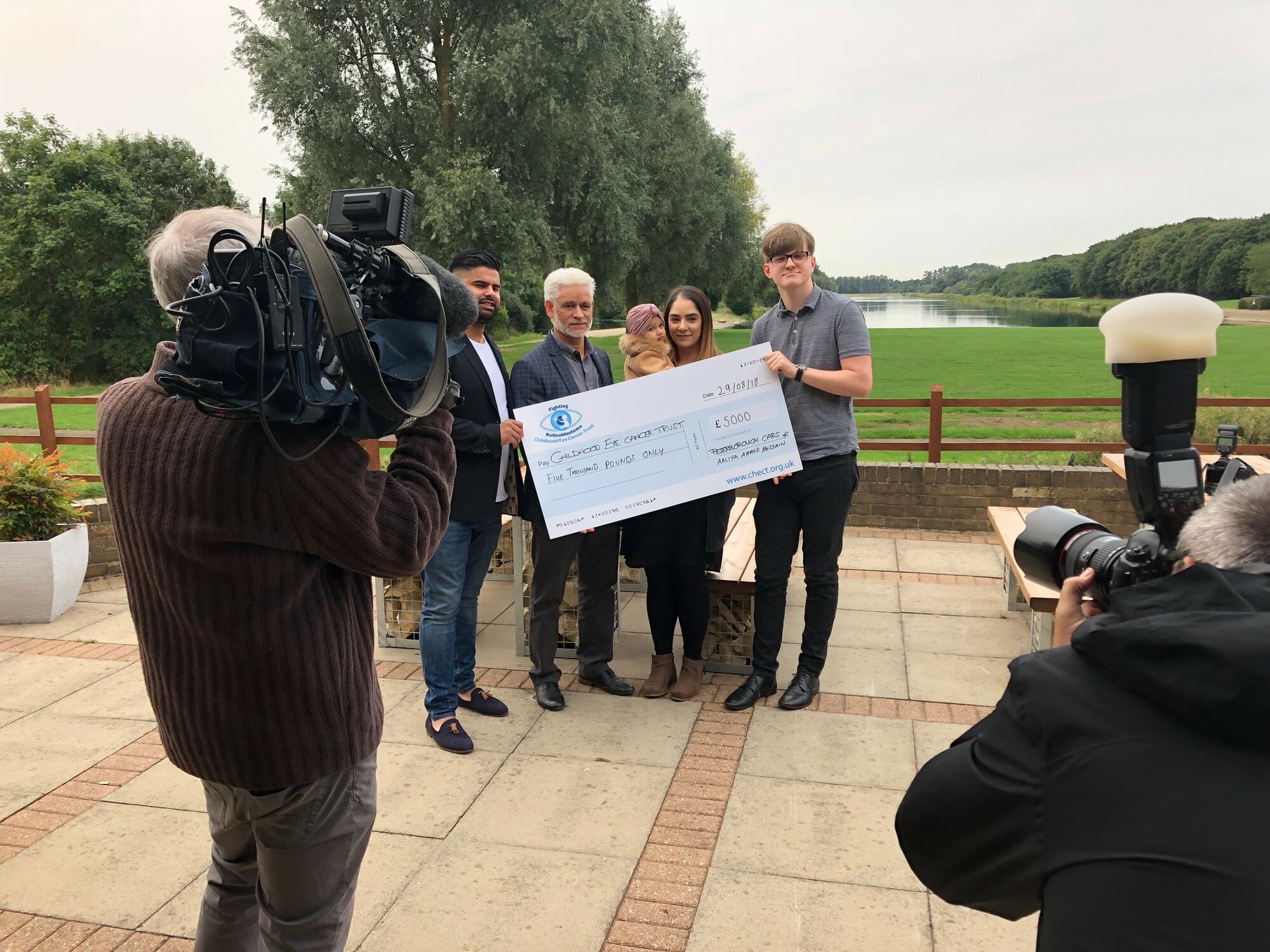 Aaliya has also been asking for donations for the Childhood Eye Cancer Trust and has raised £2,130, bringing the total raised by the family to £5,000.

She said: “We’re really keen to raise awareness of retinoblastoma because most people have never heard of it.”

Diane Emery, Fundraising Manager at the Childhood Eye Cancer Trust, said: “We are extremely grateful to Shabir, Aaliya, everyone at Peterborough Cars and their customers for their amazing fundraising efforts, during what is an incredibly difficult time for the family. The money raised will help us to support other families affected by retinoblastoma and increase awareness of this rare and devastating condition.”