Have you ever had an operation? I have. By the time I reached my fifth birthday I had undergone more operations than most people would experience in their entire lifetime. I know it sounds terrible when you put it that way but to me it was normal. I thought everyone had regular trips to the hospital and operations followed by weeks of bed rest.

I don’t remember much from that period of my life. It’s probably for the best because one thing I do recall was that the food was terrible. I have some refreshing memories of an afternoon when I was feeling particularly perky. I guess that anti-sickness meds were working for once and the sun had put his hat on. My mum and I decided that we both needed some fresh air and a break from the hospital. A visit to the park best fit the bill and so we went out and made the most of the sunshine. I don’t remember much about the park; just that I had never been there before and that I always wanted to go back. On our return journey to St Bartholomew’s we encountered a chip shop. I insisted that we stop for lunch because I couldn’t face the plain cheese sandwich and funky tasting orange squash that awaited me on our return. I didn’t eat much of the small mountain of chips and the whale sized battered fish that had been placed in front of me, I never ate much back then, but it was worth it!

When you spend the first few years of your life growing up in and out of hospitals you learn very quickly how to ask questions. “Why does my head hurt?”, “why do I feel sick?”, “what are these tablets for?”. My curiosity almost killed me once. I wondered what the liquid in the tube attached to my hand tasted like. As it so happened, it wasn’t very nice and if I hadn’t pointed out the tiny air bubble that had been created as a result of my curiosity, it could well have killed me. I was particularly inquisitive of other people as well. Some parents thought I was being nosy and annoying, perhaps even rude on occasions, when I would wander over to the hospital bed that they were sitting beside and ask what was wrong with their child. My mum was quick to join me and to explain that I was too inquisitive for my own good. I just wanted to help, if I could understand the problem, perhaps I could help to fix it. I think this stemmed from my love for puzzles and the satisfaction I got from finding the solution. I love numbers because there is always a right or wrong answer. I found riddles oddly appealing as well. The questions always seemed so strange until I was given the answer – I just needed an alternative perspective! 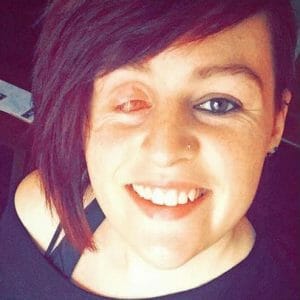 The most common response to me explaining the happenings of my early years is for people to say that they “feel sorry” for me and that I didn’t “deserve to endure such a terrible ordeal”. To this I always find myself asking “why, what is there to feel bad about?”. Who really deserves any of the difficulties that life throws at them? I certainly don’t feel sorry for myself; I’m happy, I’m healthy and I’m surrounded by people that I love. I’m a little clumsy and I often walk into things but there are a lot of people in this world that are much less privileged than I am.

Similarly, I have been called “brave” more often than I care to remember. I always struggle with a response to this one because, in all honesty, I wasn’t brave. I was a toddler that did as she was told by the nice nurses that looked after her. I was also the toddler that kicked and screamed whenever there were needles for injections and blood tests. I was the baby girl that cried until she was sick because she didn’t want the doctors to operate again. I wasn’t brave at all. My parents, were the brave ones throughout those dreadful years. They had to wipe away the tears after the blood tests and the injections. They had to clean me up when the anti-sickness medication didn’t work. They were the ones that had to hold me down so that the doctors could put me to sleep and operate for the umpteenth time, despite all of my protests and tears. They had to stand up for me when I was too small to do so and they had to teach me how to stand up for myself. My parents were also the ones that taught me how important happiness is in life and how everyone deserves to be happy.

As a teenager I was full of worry, anxiety and stress. I spent so much time trying to please others and worrying about my appearance that I forgot about my own happiness. As for now I live my life like any other 24 year old. I might be a little more accident prone than most but I have a normal job, I like to drink cider and I love cooking. I enjoy girly nights out just as much as cosy nights in on the sofa and I spend the rest of my spare time in the gym or out walking in an attempt to work off the side effects of such hobbies. I wouldn’t say I’m normal but the fact I’m missing an eye certainly isn’t the strangest thing about me. I mean really, who puts pineapple on pizza?!

“Lucky” is a word I like to use to describe myself. This isn’t just because I was born on Friday the thirteenth – it also happened to be 7.13am and I weighed in at seven pounds and thirteen ounces. I think that I am lucky because my mum just happened to read an article about retinoblastoma in the newspaper. I’m lucky that she was able to spot one of the symptoms in me. It was lucky that she came across such an article at all let alone that she took something from it. I am lucky to have survived cancer not just once, but twice. I am also lucky to have such a loving and supportive family in my life. You could even say that luck got me through my GCSE’s after spending so much time in and out of hospital. Some people may say that I am unlucky, but for all of these things I am thankful. I’m thankful for the people in my life and for everything that I have learned from my experiences.