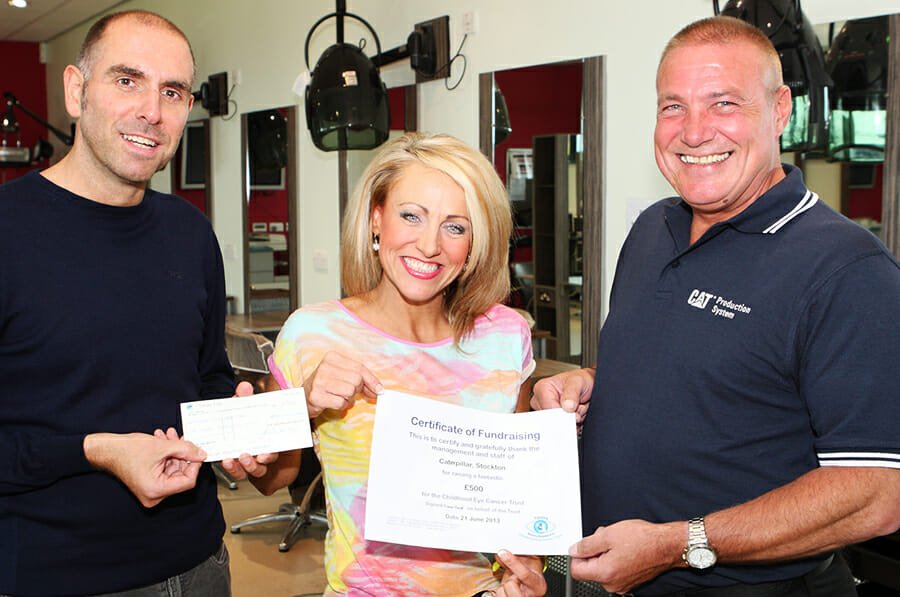 Alison Scattergood was just six weeks old when she was diagnosed with the eye cancer retinoblastoma, and within a month she’d had her eye removed. Now aged 42, she has a successful, award-winning career and the family she always dreamed of. Her inspiring story proves how cancer can touch your life but it doesn’t have to ruin it…

My Mam tells me that from when I was around three weeks old she noticed something wasn’t quite right with my left eye but couldn’t see what, as I slept a lot as babies do.

The first visit to the doctor was unsuccessful as he couldn’t get me to wake up either but a week or so later my older sister Sharon, who was seven at the time, was looking in the crib at me when she suddenly pointed out that something was wrong with my eye.

I was diagnosed with retinoblastoma at six weeks old and had to have my left eye removed at ten weeks old. Of course this was a devastating blow to all of the family. 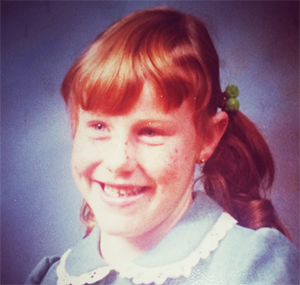 Growing up with an artificial eye
Life for me was pretty normal growing up, there were kids at school who would make comments and remarks about my eye but I also had a great group of friends who were really supportive which helped.

My family were really protective, especially Sharon who would step in and come to my rescue if kids were cruel or if she was aware of anyone making fun of me, which did happen, but the way I was brought up made me really resilient.

I remember my trips to hospital for regular check-ups and being measured for new artificial eyes, but other than that I was like every other child or teenager.

I always wanted to be a hairdresser from when I was small, and if I visited a salon with my Mam I loved the smell. At the age of 14 or 15 I did work experience in a local salon, which led to me getting a Saturday job and then completing my training there while attending college one day a week. I worked in the salon for many years.

Possible long term effects of retinoblastoma
When I was 17, I had an appointment at Newcastle’s Royal Victoria Infirmary Hospital with a professor who explained my retinoblastoma in more detail to me, and how it could be hereditary. She said there was a 50/50 chance that I would pass it on to my own children when the time came.

She advised that if I met anyone special in the future and became involved in a serious relationship that I should discuss this with them. At first this was quite a shock and took some sinking in, but I tried not to hone in on things too much as I was still so young and knew that this would be a few years away.

I loved my job and learned to drive when I was 19. Passing my driving test first time was a highlight for myself and my parents, and having the independence was an amazing feeling.

Over the years I continued my career in hairdressing, having a stint on a cruise liner, and at the age of 21 I completed my first teaching certificate which enabled me to teach hairdressing and barbering. I also became self-employed and set up my own business.

Starting a family
Socially I loved going out with friends, having fun, girls holidays etc, and at the age of 22 I met my husband David. We married in 1997 and had our first son, David Mitchell, in 1998. We were overjoyed but at the same time scared of what we might have to face.

Doctors made us aware that if the cancer was hereditary there was a 50/50 chance it may occur in both eyes. This was my biggest worry, wondering how we would deal with it if this was the case.

Feelings of guilt were part and parcel of the situation, knowing it was down to me if anything developed in my children but at the same time I had always dreamed of having a family one day.

Throughout my pregnancies with both my boys David, now 17, and Sam, 13, nothing could be seen or monitored on the scans so as soon as I had given birth a paediatrician came and checked my baby in the delivery suite. 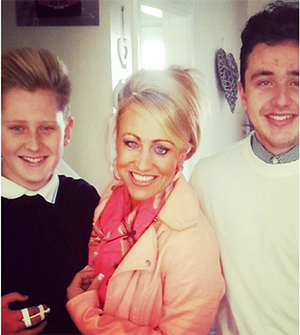 Alison with sons Sam and David

We were automatically referred to the RVI Hospital where both the boys were screened for quite a few years. They had their first general anaesthetic at eight weeks old and they continued every few weeks until they were old enough to sit and have their eyes examined without having to be put to sleep.

These appointments would take up a whole day and were quite traumatic for us as parents waiting for the doctor to come and give us the news but thankfully each time our boys were fine. I thank my lucky stars for this every day.

Living life to the full
My life is great at the moment. I have my wonderful husband, sons and close family and friends who I love spending time with.
Generally being blind in one eye only affects me on very few occasions these days. The main one is probably when I’m out shopping and it’s busy – I tend to bump into people on my left side sometimes without realising. Apologising gets me out of these scenarios!

I have worked at East Durham College for the past 11 years, teaching hairdressing and barbering. I love my job which has being going from strength to strength in the past couple of years. I have received awards and was the first British female to be awarded a British Master Barber Award for my contribution to the hair and barbering industry.

I am part of the Hair Council Committee, and I am now also a consultant for City and Guilds, working on the hair/barbering latest qualifications. To top my year off, in the summer I was presented with the Teacher of the Year 2015 award by the college.

Retinoblastoma is a life-changing, awful disease but it doesn’t need to be a life sentence. My parents always instilled into me that I had to focus on what I had in life instead of what I didn’t have which, looking back, is simple but such true advice.

I’m now almost 43 years old and there’s still sometimes a small looming thought in the back of my mind of the secondary cancer that can be linked to retinoblastoma later in life but I soon block it out when I look at my boys and see how lucky I have been. I am truly blessed.

We know that for some people, having retinoblastoma can have a lifelong impact and we’re here to help. Our adults after retinoblastoma page is full of advice, information and ways to get in touch if you need some support.