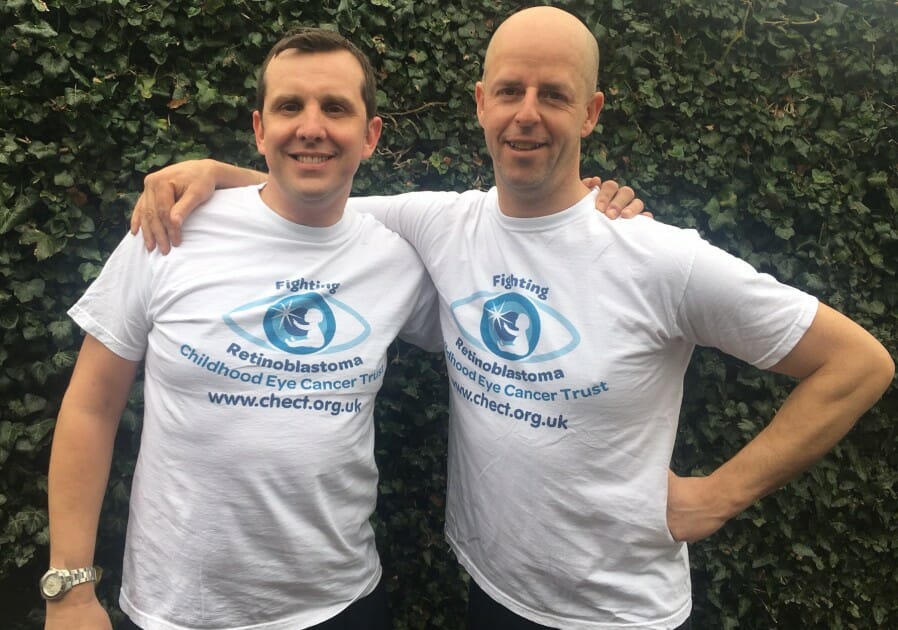 Next month Phil Mills is running the London Marathon for CHECT after being inspired by his fiancée Miriam’s mum and sister, who were both affected by retinoblastoma…

It’s his fourth London Marathon – and, he insists, his last – so Phil Mills is no stranger to blisters, exhaustion and Jelly Babies.

As he gears up for the 26 mile run through the capital in a few weeks’ time, he tells us what inspired him to put his running shoes on one more time so that he can raise money for the Childhood Eye Cancer Trust.

Phil (pictured here with his friend Andrew Smith) says: “Miriam’s mum, Judith, is blind and has been since the age of two. Sadly, she was born with retinoblastoma and had to have both eyes removed as there was a risk of the cancer travelling down the optic nerve to the brain.

“Despite living with no sight, Judith is a strong and determined lady, and has many achievements including a long career as a physiotherapist.”

In 1972, Judith met her husband Andrew and they went on to have three children – Miriam, Stephanie and Christopher. Sadly, Stephanie was born with retinoblastoma and had to have her right eye removed at five weeks old. Fortunately, due to more advanced treatment, her other eye was saved.

Phil says: “I feel passionately that through continued fundraising we can continue to make a difference, by enabling further research and development in treatment for this aggressive and rapidly spreading form of eye cancer.”

Phil first ran the marathon in 2003, followed by 2007 and then 2011. Training for this year’s run didn’t start off very well when he developed a chest infection in January, which lasted three weeks, closely followed by a tooth infection.

But now he’s on the mend and fighting fit. He says: “February’s training went much better and I completed the Cambridge Half Marathon at the end of the month so I’m feeling more positive about the big one!”

If you would like to sponsor Phil, please visit his JustGiving page.