Being diagnosed with retinoblastoma back in 1950, Greg Ovens recalls his life experiences including fond memories of his ‘days out’ at Moorfields Eye Hospital with his father.

As I approach my 70th Birthday, I have been reflecting on the highs, lows, ups, downs and the many great and magical times l have had in my life so far. 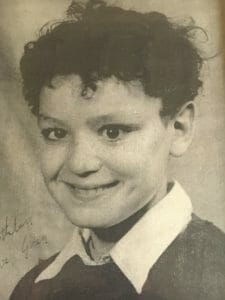 My journey started back in 1950, when at 10 months old it was found that I had a retinoblastoma. The eye cancer was not unknown of at that time, but treatment was in its infancy and immediate eye removal was the only option to stop the spread of the cancer.

My family had no history of the disease and my parents were very shocked at the diagnosis given to them following an initial appointment at Moorfields Eye Hospital in London. It was first suspected after my mother had noticed a strange reflection in my left eye while she was drying me off during bath time.

What quickly followed was a long and drawn-out stay at Moorfields Eye Hospital with an operation to remove my eye, as well as a post-operative treatment which continued for many months. Apparently at one point I actually thought that Connie, my favourite nurse, was my Mum!

As time moved on, I continued to visit Moorfields every month for check-ups with my father, sometimes accompanied by one of my brothers or sisters. Dad made the visits a day out for me, we would take the bus from Fulham (West London) to the City, and have tea and a pastry at the hospital canteen. We would sit on the long wooden seats in the waiting area, gradually sliding along until it was my turn to be called.

The surgeons sat perched on tall stools behind tall desks at the front of the room. They examined you from above, looking down from what seemed like a great height – I thought these men were giants! After each examination, we would go to see the hospital’s Lady Almoner (similar to a social worker). She would organise my next appointment and also arranged our visits to the artificial eye consultants.

As I grew, my glass eyes were changed regularly – and as a small, active boy – replacements due to loss or breakages were pretty common as well! These artificial eye clinics were in a Victorian building near to the hospital – a strange place with thousands of glass eyes in cabinets all around the room. Seeing them like that – it seemed very creepy as I recall! After that, Dad and I would make the trip home – a long walk, a bus ride and long walk at the other end.

Looking back, I now realise the incredible effort my father had to go through. The trips took most of the day, and happened straight after my father had finished a night shift – he was a stoker in the boiler house at Fulham Gas Works. Then once we got back home he had to get ready for another night shift – all with little or no sleep.

My appointments at Moorfields continued regularly until that amazing day, when at the age of 21, I was told I didn’t have to come back and was finally discharged. That day is forever etched in my memory! 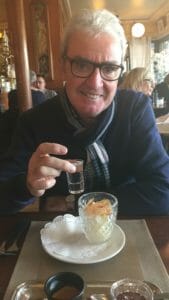 I can only say that the loss of an eye has never had a negative impact on my life. There is nothing I have not been able to do (except play the piano!). I have played many sports, some well, some badly, but have never felt that my prosthetic eye has stopped me from doing or achieving anything. My career has been interesting, varied and has given me many opportunities to travel and work abroad. Since retiring eight years ago, my wife and I have continued to travel extensively.

I would like to take this opportunity to thank the doctors and staff at Moorfields who saved my sight and my life, the Childhood Eye Cancer Trust who continue to do such important work, my family and friends and all the other people along the way who have given me their love and support.