CHECT ambassador Katy Bishop braved scorching temperatures and steep ravines to raise money for families affected by retinoblastoma. She reveals what it was like taking on one of the natural wonders of the world…

“I always wanted to see the Grand Canyon but I never thought I would. And not for a second did I think that I would go because of my son’s cancer. But that is what happened.

Owen was diagnosed in 2010, aged 10 months, and is now a thriving six-year-old, full of fun and joy, and he makes me proud every single day.

As most parents of a child with cancer will know, we immediately wanted to do something to aid the fight – not just ours, but everyone else’s too. I guess the biggest part of it is that it gives you something else to focus on. Something positive.

So we started fundraising. We did golf days, raffles, cake stalls, carrot walks and fun day events for the community. Since 2010 we’ve raised more than £15,000. It’s all been rather hard work but we’ve had awesome fun along the way.

Trekking through the unknown 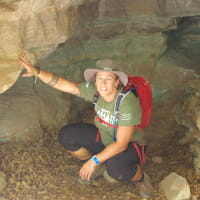 This challenge was completely different from everything else. I was flying halfway across the world to trek through the unknown. It was simply mind-blowing.

I had to raise £2,600 but I’ve already achieved around £6,000! Leading up to the event, myself, my brother-in-law and the local community did many challenges and all the funds raised went towards the total for this trek. It’s been amazing.

We started with a trek in a hot, dusty ravine to acclimatise to the heat and terrain. It was around 45 degrees and the going was tough. The group struggled a little, concerned at what we had let ourselves in for, some more than others, but we supported each other along and got through it.

The next day we made an early start to the canyon. Once you descend the ‘Hilltop’ the only means of transport are feet, be it yours or mules. There really are no words to describe what you see. The photos cannot quite bring to life the true majesty of the canyon.

You’ve got to be very careful to look where you’re walking or you’ll be tripping over rocks or off ledges. The canyon descends down from 5,200ft to 2,800ft, most of that initially on the first mile and a half so the first bit of descent is steep and tricky. Once this has been negotiated the canyon opens up flatter and unbelievably, more lush.

Wifi at the Havasupai Indian Reservation

We trekked eight miles toward our campsite and through the Havasupai Indian Reservation where you must sign in. The tribe has tight control on tourists, allowing only a certain amount of people in and they have strict rules about no alcohol and so on.

I really did expect the tribe to be living in teepees but they live as we would, with modern facilities and wi-fi! Eight miles into the canyon and we were able to social media ourselves right up!

We trekked for three days through creeks and climbed down, then back up the 200ft Mooney Falls. We visited Beaver Falls and spent time there jumping off the waterfalls into the turquoise water.

Learning to trust your feet when you’re on a small ledge – it doesn’t always come easy. But that’s what so great about going in a group. Everyone has their strengths and weaknesses and we are able to support each other along.

The last day of the trek saw us up and out by 6am to beat the sun and we were in Las Vegas celebrating later that night. There was talk of the Canadian Rockies next year – watch this space!”

Katy’s story appears in the winter edition of our InFocus newsletter. If you’d like to receive InFocus you can join as a member (it’s free).

Take part in your own challenge

We have a number of once in a lifetime challenges taking place throughout 2016 across the globe – from Peru to Cambodia.  Check out our overseas charity treks page for more information.