Signing up for the Great Wall of China Trek was one of those things that I do under the category ‘Act Now; Engage Thought Process Later’. Having joined CHECT in November 2015, I discovered that our very small staff team was full of runners/joggers/ultra-fit people signing up for various running races, and being a fundraiser, I felt that I really should do some form of extra-curricular fundraising myself. I used to do a fair bit of trekking in my former life (pre-children), and   somehow found myself filling in the application form to walk the Great Wall without a moment’s serious thought of how fit I was or how much training would be needed.

I gave myself a year to train for the trek, which of course I didn’t do, and had to hope that a couple of months of yomping up hills every weekend and route-marching our puppy round the local park everyday would be enough. Fortunately, when I met the group going to China with me, it seemed that we were all nervous about our lack of training and were equally concerned about being the token un-fit person puffing along at the back!

The first things that I noticed about Beijing – and China as a whole – were the extreme heat and the sheer size of the place. Beijing Airport was absolutely colossal. We flew into Terminal 3 and had to take a 7 minute monorail journey within the terminal just to get from Arrivals to Baggage Reclaim!

Having arrived and met everyone else in the group – 38 of us, aged from 20 to 60 – the trip started with a two hour coach transfer to our first night’s accommodation in Huangyaguan. The Wall is right there next to the hotel complex, and that afternoon – deprived of sleep and really jet-lagged – we went on our first short walk to acclimatise. 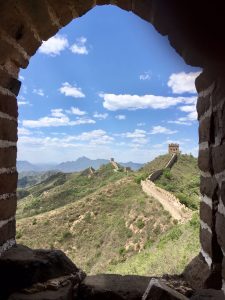 The short acclimatising walk became a legendary anecdote for the rest of the trip, because it was astonishingly hard work even for some of the fittest members of the group. I have asthma, and within the first ten minutes  my lungs were asking me what on earth I was doing to them. I was in tears, I was all set to drop out of the whole trek there and then because clearly I was not cut out for this, and I limped up to our fabulous group leader Jim to tell him that I just couldn’t go on. Jim clearly disagreed with me. “Yes you can!” he said. So I did.

The whole week became a huge lesson to me in terms of building confidence and believing in myself. We had incredibly challenging treks up into the hills every day, and walked miles and miles up and down steep inclines between the many watchtowers along the wall.

Day 2 involved a three hour walk on a fairly busy section of the wall, where dozens of local Chinese people were taking in the sun and fresh air – and the highly amusing sight of 38 pasty-skinned Westerners dressed as if we were preparing to conquer K2! They found us absolutely hilarious and many of them posed for selfies with us.

It struck me how fit the Chinese people were and their ability to run past us in flip-flops as we trudged along in our giant boots and purpose-built trek attire. One lady careered along the Wall with a baby in her arms, six-year-old daughter in silver sandals skipping along at top speed behind her. When the baby needed changing – no problem, the lady had a spare nappy in her hat. This glimpse into their entirely different world was fascinating and a real privilege. 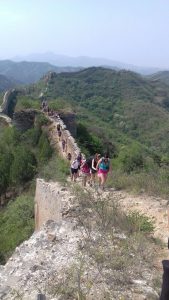 Day 3 – trekking along the top of a ravine

Day 3, we experienced our longest day of walking, eight hours’ trekking along what was basically the edge of a very narrow cliff where the Wall had stood until it crumbled away hundreds of years ago. On some sections of this part of the walk there were truly scary moments, where we essentially had a choice of falling 300 feet into scrubland in mainland China or 300 feet into a selection of trees the other side into what was previously Mongolia. I can’t remember ever having to concentrate so hard on anything before – every footstep had to be in exactly the right place to get us safely through the narrowest passes.

After five hours of really challenging walking, we arrived in a field in completely the middle of nowhere to find a lady in a large tent selling a wide range of still and fizzy drinks to those of us who had ventured five hours off the beaten track! Where on earth had she come from? Where did she get her drinks from? How long was her journey to work?! I had similar thoughts when we met a police officer and local lady two hours further on, who were guarding the first watchtower of the newly built stretch of Wall.

Day 4 was a shorter day of walking but had some exceptionally steep inclines in it, including a couple of places where the upward slope was so steep that without walking poles it was barely possible to remain upright. Shortly before stopping for our well-earned lunch break, there was a ridiculously steep stretch up to one of the watchtowers. 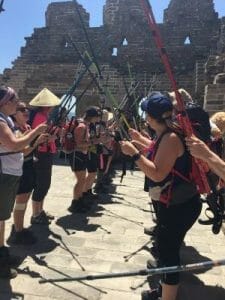 Completely impromptu, the group assembled by the entry to the watchtower, waving their walking poles aloft in a big arch and singing The Grand Old Duke Of York. As each of us nearer the back puffed up the last stretch, we were pulled the last few steps by those who had arrived already and then had to walk through the archway of poles to join our place to greet the next person. This camaraderie was indicative of our group – I cannot imagine a nicer, more caring group of people where every single member of the group looked out for friends who were total strangers only a few days earlier.

One of the things that I noticed repeatedly during the trek was the astonishing beauty of the mountainous Chinese countryside. Whenever I felt stupidly tired and like my lungs would never forgive me for attempting to walk another step, I stopped and looked around and felt quite emotional to be in the middle of such beauty. Obviously I was taking part in the trek to raise funds for CHECT, and I felt terribly aware that many of the babies, children and older people who have had Rb will not ever see some of the astonishing sights and views that I’ve had the absolute privilege of seeing. 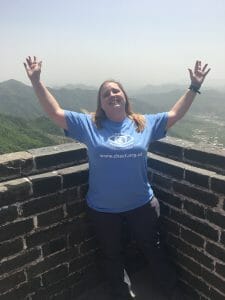 Day 5 was the most challenging in terms of the number of steps upwards. Having had the luxury of popping into a genuine branch of Subway to collect our lunchtime sandwiches, we had to trudge up a mere 1,000 steps to reach the Wall. Having reached the Wall, there was a route of another couple of miles of going up and down before we reached the foot of the Heavenly Ladder. This is a 450 step tall, almost vertical stretch of Wall which – unsurprisingly – has the most extraordinary views from the top. I had been quite nervous about Day 5 for months, and had half convinced myself that I might not even try to get to the top of the Heavenly Ladder, but with vast amounts of encouragement from the group and being pulled up the final few steps I did get there. Once actually at the top my legs started to wobble and I even had a few tears. This was as much a mental and emotional achievement as it was physical.

The big plus about being so high up was that we then had to come down – and although walking was the only way down the Ladder, the most fashionable method to get back down to earth was by toboggan! Five whole minutes of snaking along a toboggan track at shamefully slow speed  showed me just how high up we’d been that morning.

Day 6 dawned and I was amazed to be genuinely sad that this would be our last day walking on what had definitely become ‘our’ Wall.  Our final Wall-related activity was for each of us to lay our own brick on a part of the Wall that’s currently being reconstructed. We each wrote our own private note to go between the cement and the brick, forever hidden in the Wall. Mine was a short message to my husband and children (and the dog and cat too, of course), meaning that although it was only me who visited, part of them will always remain there too.

I raised £970 for CHECT, which made all of the hard work worthwhile. Huge thanks go to fabulous tour guides Jim, Alex, Michael and Miko, and the truly wonderful group that I was with, for being part of an experience that I will remember and treasure forever.