“Finally we can have the Christmas we’ve been waiting for”

UPDATE: Shortly after this story was published, Laila, Ollie and Noah were featured on BBC South East Today. The BBC kindly sent a recording of the piece to us to share with everyone:

Christmas is supposed to be a time of joy and celebration, but for Laila Gaudry and Ollie Blanks it was the moment they discovered that their little boy had to have his eye enucleated. Here Laila, tells their story…

After the worst year of our lives, we were busy planning the best Christmas ever – a new chapter for us all. Our son Noah had been diagnosed with retinoblastoma in the summer and those difficult months of chemotherapy were finally coming to an end. Tests had shown that his tumour was shrinking and we thought we’d saved his eye. 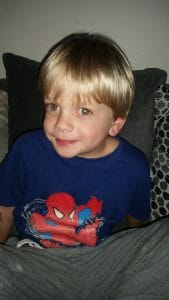 A camera flash showing the white glow in Noah’s eye.

So, when we went to the retinoblastoma clinic a few days before Christmas Day we were full of hope because we could see the light at the end of the tunnel. I knew it wasn’t good news when the doctor shut the door and pulled up a chair. He explained that Noah’s tumour had grown substantially and the best option was enucleation. After everything Noah had been through, I couldn’t believe it. What was meant to be a good bit of news before Christmas had turned into a nightmare.

An unusual glow
It all started in 2017, when Ollie noticed that Noah’s left eye looked odd. A couple of weeks later he noticed it again. The first thing that Google came up with was retinoblastoma and after reading about the white glow, he got his phone out to take some pictures with a flash. We were horrified when one showed the white reflection.
We called 111 and got an urgent doctor’s appointment that night but we were sent home and advised to contact our GP to request a referral to the local eye clinic. There, initial tests showed that Noah had very little sight in his left eye.

Three days later we saw a specialist eye doctor and the word retinoblastoma was finally mentioned. We looked at each other as we fell apart. The doctor made an urgent referral to The Royal London Hospital. While we waited for Noah’s appointment we just kept telling ourselves that as long as it hadn’t spread, we would get through it.
At the Royal London the diagnosis was confirmed – it was a grade D tumour and it was felt that the best course of action was chemotherapy. The doctors stressed that Noah may still face enucleation if the tumour didn’t respond to treatment but we felt a wave of relief coming over us as we’d prepared ourselves for the worst case scenario.
A few days later we celebrated Noah’s fourth birthday, making it as special as we could before he started his treatment. We knew we had a long journey ahead.
Noah’s treatment

Noah would need six cycles of chemotherapy. The path was always going to be hard but life threw some extra challenges at him from the beginning – he had an allergic reaction to the medication and developed a fever. But as time went on there were fewer complications and the tumour was responding well.

As Christmas approached we felt the end was in sight. The chemo had done its job and it was going to be the best Christmas of our life, something that would give the kids enough happy memories to counter all the anxieties and uncertainty of the last few months. Ollie and I went to see the kids’ nativity together and it felt so wonderfully normal as we all cooed and teared up at the children.

So when we learned that Noah needed surgery, I had an anger and heartache raging inside me that our little boy had fought so hard. But I also wanted the cancer gone and I knew that once his eye had been removed it couldn’t hurt him anymore.

A new start
Noah had his enucleation on 27th December. Under advice from the Rb team and other parents we let him have his Christmas and didn’t tell him until Boxing Day. I think he was a little confused about what to expect but he took it very well. 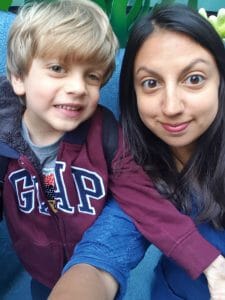 Noah had his temporary prosthetic fitted four weeks later and I was truly amazed at how good it looked and how well he coped. At his first check-up post-surgery he was given the all clear.

Noah is now six years old and doing really well. His big brother Jake is so supportive and they’re inseparable – best friends and partners in crime. I’m relieved Noah had the surgery rather than going through more treatment and it was the right decision for our family.

Last year we moved to Eastbourne and it felt like a fresh start. Everything is moving forward and Ollie and I are getting married next year. Christmas is approaching and we’re really excited. We’ll spend the day with my family in London and there are lots of new additions to the family so it’ll be wonderful to see the ‘new generation’ together.

We’re also going to Lapland thanks to a wish granted by the charity Rays of Sunshine. We haven’t told Noah yet as we want to surprise him. Life is so much better and I hope our story can help other families to know that there really is light at the end of the tunnel.