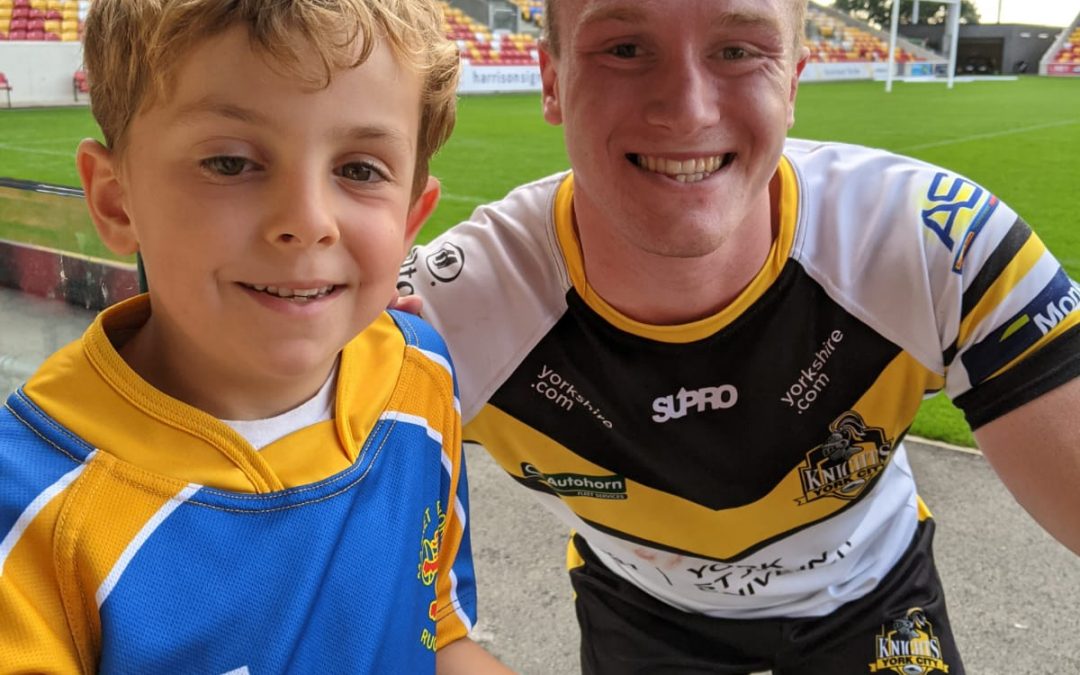 In the latest issue of InFocus magazine and for a video for our social media channels, we interviewed rugby star Will Jubb, who was diagnosed with retinoblastoma (Rb) at two years old and had his right eye enucleated. However, playing with one eye has not held him back from a successful rugby career, as he plays as a hooker for the York City Knights professional rugby league team.  Charlie Earp, who also had his eye enucleated after being diagnosed with Rb, has been playing rugby with Market Bosworth since he was 5 years old. His mum Zoe spotted the article and interview and shared it with her son Charlie as she noticed the common ground.

Zoe says, “I spotted the interview with Will when it dropped into my inbox a few weeks back and read it aloud to Charlie. I was so impressed by the article and by Charlie’s response to it, that I tweeted it (my first ever tweet really – apart from Charlie’s reading channel). After we watched the interview, Charlie turned to me and said “so, he’s like my rugby twin?” which I think is what struck me most – that Charlie had recognised ‘someone like him’ and I realised that Will is probably the first adult with RB and a prosthetic eye that Charlie had been exposed to.”

Charlie on the way to meet Will Jubb

Zoe was contacted by York City Knights off the back of her tweet, who invited Charlie to attend a game and, Covid-permitting, meet Will himself.  Charlie was delighted to take them up on their kind offer and so they set off on a 2 hour drive to York. While his mum and sister had a wander around York with a hot chocolate and cake, Will and his dad Ashley headed into the stadium to watch the game. 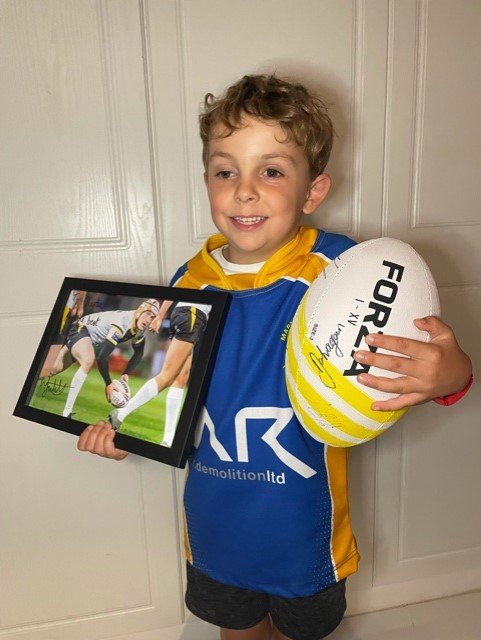 Charlie was delighted to meet his ‘rugby twin’

Zoe explains, “Joe from York City Knights (YCK), had asked that we message once they were in the stadium and he would find them before the game so that he knew where to direct Will after the match. Charlie really enjoyed the game and even Charlie’s dad Ashley, a lifelong Tigers and Union fan (we are from Leicester after all), was impressed by the pace of the game. Knights had a fantastic game and won. As soon as the game ended Ashley spotted Joe heading out onto the pitch and straight to Will. Will waved at Charlie which got a big wide-eyed open mouth response, and headed over when he was done with the post-match team duties.” 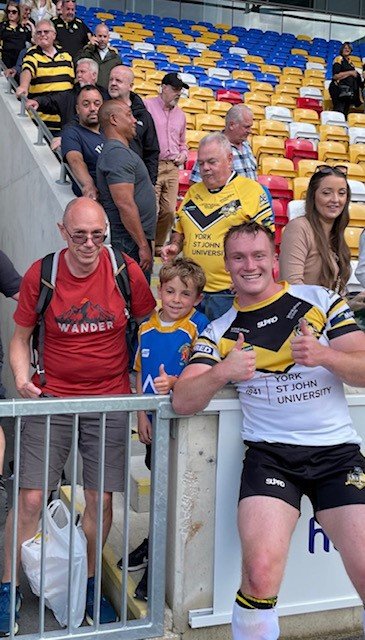 Will Jubb came to see Charlie after the game

Zoe adds, “Charlie is never normally short of words and would make friends in an empty room but was perhaps a little awestruck when Will came over. Ash, Charlie and Will chatted, took some photo’s and Will handed over a signed ball and personalised signed photo for Charlie too which he was very excited about and which is already on his wall. When we met after the match, Charlie chatted non-stop about the game, about how fast it was and about Will and said that his favourite bit was ‘”the whole game and having my photo taken with Will”. Charlie and dad also said that Will has invited him back and we will find a date to make that happen too”

A big thank you to York City Knights and Will Jubb for providing such a great experience for Charlie!