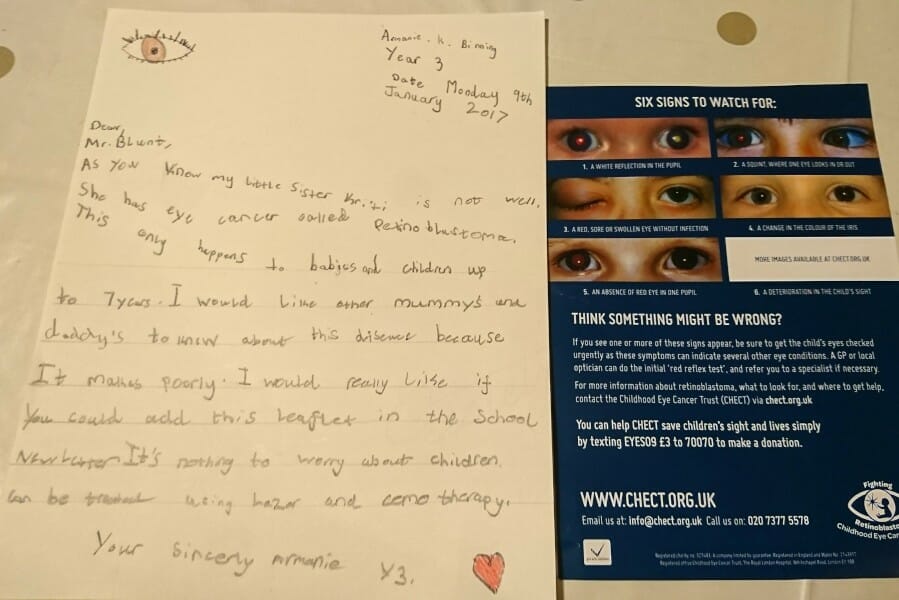 Seven-year-old Armanie Binning is doing her bit to raise awareness of retinoblastoma by writing this heartwarming letter to her headteacher.

Armanie’s little sister Krïti, who is six months old, has been having chemotherapy after being diagnosed with retinoblastoma.

Armanie has been very upset about her little sister’s illness and treatment, and wanted to do something to help, so she wrote a letter to her headteacher at school.

In it, she enclosed one of our leaflets, which shows the signs and symptoms of retinoblastoma and asked if it could be included in the school newsletter.

She told us: “I wanted people to be aware of retinoblastoma so other people’s sisters don’t get ill.”

Her mum Aazmeen said: “We have been very honest with Armanie and explained that Krïti has to be poorly to get better. It’s been an emotional roller coaster for Armanie and it was important for her to be involved in a positive light and to feel she’s doing something to help.

“By informing her friends and other school pupils, she gets a sense of satisfaction.”

In the letter Armanie writes: “As you know, my little sister Krïti is not well. She has eye cancer called retinoblastoma. I would like other mummies and daddies to know about this disease because it makes you poorly. It’s nothing to worry about, children can be treated.”

Well done to Armanie, what a brave young lady. If you would like to help raise awareness by giving out leaflets about retinoblastoma, please email us at info@chect.org.uk or call us on 020 7377 5578.

We know that brothers and sisters of a child with cancer can be affected in different ways. There is support available and your CHECT support worker will be only too happy to help, so please do get in touch if you have any concerns at all.