Cambridge student Dominic Bielby shares his story on how having an artificial eye has not held him back. Instead, he found that embracing his uniqueness can be used to his advantage when making new friends.

My very first memory is sitting up in a hospital bed, watching the trolleys and patients scurry past me in a paediatric ward. After a while my own bed is wheeled away into a room nearby, a clinical green glow awash on the walls as a breathing mask is placed over my face. With the taste of anaesthetic I can still sense today I drift to sleep. It was just one of the many check-ups and follow-ons I received after I had my left eye removed, back when I was just two, in order to treat my retinoblastoma.

Back then I had absolutely no idea what was in store for me in the future. Now, thanks to some hard work and a bit of luck, I’m studying Law as an undergraduate at the University of Cambridge. For me, it’s a dream come true and being an Rb survivor never held me back.

I’ve never seen my artificial eye as a disability (and even if I could, I wouldn’t be able to see it all!) but rather as something unique about my person. One of the main fears that comes with having an artificial eye is social interaction, that feeling that somehow you won’t fit in because your eye contact is slightly off or your face is not quite symmetrical. That idea can take root, especially when having an artificial eye is relatively rare means there’s no-one to tell you what it’s been like for them. When it comes to a major change like heading to university for the first time that fear can seem even more pronounced.

In my experience, all through school and now, at the start of university, having an artificial eye has never been an obstacle to making friends and being social – in fact I’ve found it advantageous more than anything. I can guarantee that nothing spices up the blandness of yet another, ‘What’s your name, where are you from and give us an interesting fact about yourself!” than casually dropping in the fact that you have an artificial eye. As an icebreaker, it’s unmatched.

But whimsicality aside, in all my time as a student, even in the daunting setting of starting as a fresher at university, not once have I been met with anything other than interest and intriguing questions when my artificial eye or my Rb has been brought up. It has never been anything other than a point of interest and has never stopped me from making friends and going out.

It is quite odd when your best friend takes a pause and all of a sudden comes out with, “You know, I forgot you have a fake eye!”. In some ways I forget myself sometimes because, at the end of the day, your social life and your friendships aren’t defined by your Rb or your artificial eye – what matters is your own personality. Having an artificial eye doesn’t make you uninteresting or unwanted, in fact, I’ve found it to be my own special way to connect with new people and make new friends. When life gives you lemons, you make lemonade, and having an artificial eye is a great way to spark a chat with someone – before you know it, you’re friends.

In spite of having been diagnosed with Rb seventeen years ago, and in spite of my artificial eye and all the pressures and hardships and problems that came with that – for myself and my family – I was able to get myself a place at one of the best universities in the country. If I can do that as a survivor of Rb and with my artificial eye, there’s nothing to stop the same from holding anyone else back. 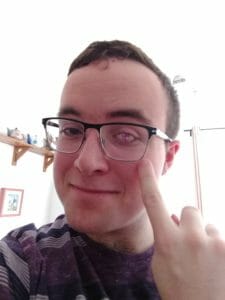 UPDATE: Celebrating his uniqueness one step further – and to mark the end of his freshman year – Dominic has recently received an artificial eye painted to reflect his Corpus Christi College crest.
Dominic set up a Go Fund Me page to raise money for the prosthetic eye – which he has personally matched and donated to CHECT. He’s promised donors that he would wear it to college events, tours and maybe even interviews too!