When they said I was going to lose my eye, I was almost relieved – I thought it was going to be so much worse.” 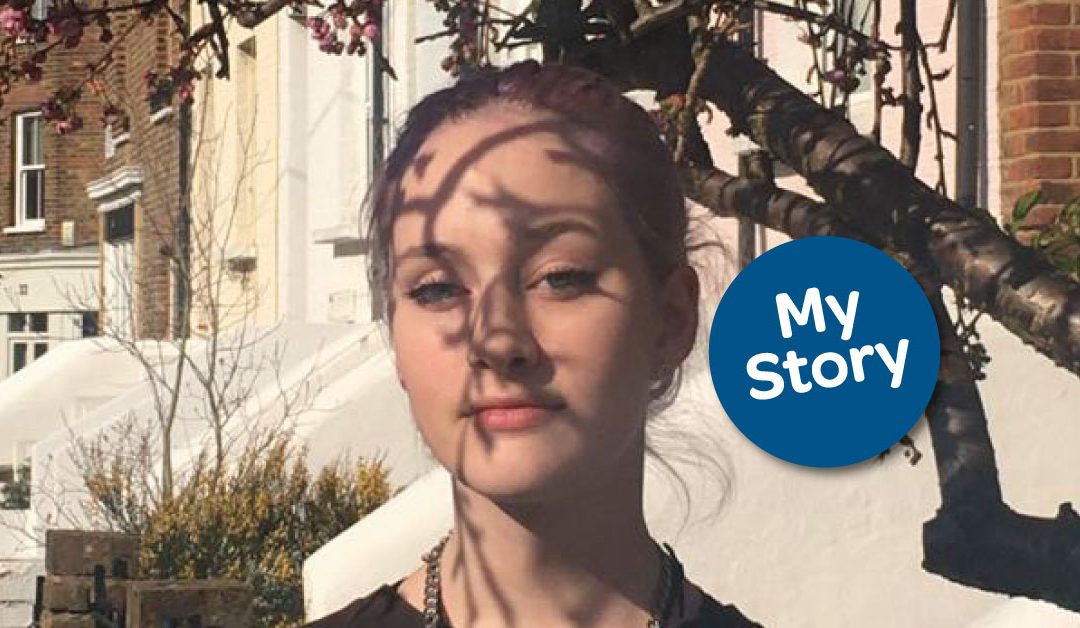 Eloise Patterson was nine years old when she was diagnosed with retinoblastoma (eye cancer), which typically affects children under the age of six. As a result, unlike so many children who have experienced Rb, she is able to remember her diagnosis and journey through treatment. Now aged 16 she caught up with CHECT to tell her story:

“Yep, I have cancer”
I remember having these ‘black floaters’ in my vision. Most people get them when they look at a bright light, but I had them continuously – bug-like wiggly lines everywhere I looked. Concerned, my mum took me to the opticians, however they didn’t spot anything unusual – possibly because my tumour was quite far back and harder to detect.

We then noticed that in flash photos taken of me, one of my eyes would go silver and the other would go red. After further medical advice, we ended up at the Royal London Hospital. It was there that they diagnosed me with retinoblastoma, an eye cancer which normally only affects babies and younger children.

When I was told that I had cancer, I was simply like “ok”. Being only nine at the time, I didn’t really know what cancer meant – it was just something which I heard on TV shows.

Like me, I don’t think my friends were really sure what cancer meant either, and then they obviously went home and told their parents and found out. Their parents also got in touch with my mum to make sure what they were hearing was true.

My friends were really great – they were all open about it – including my class at school. When I finally got my head around cancer and my treatment ahead, I explained to my classmates about my up and coming chemotherapy – including things I’d read about in the books that the hospital had given to me.

When I started chemo and lost my hair, I never once had an issue with people being mean or asking why I was bald – which I’m really glad about because I imagine that would have been hard to deal with. I feel that if I hadn’t been so open about it at the start and tried to hide what was going on, there would have been a different reaction.

A support network
One of my teachers at school, who previously had cancer, offered to lend a friendly ear if I ever needed someone to talk to. That was really nice. They have support workers at hospitals, but knowing I’d have someone to talk to who personally knew me was great too.

My mum also had a friend who was recovering from cancer and she was brilliant – she’d come around to the house all the time and talk to me about it. She told me that she had so many cravings during chemo and that she went through a phase of constantly eating Magnum ice creams! She was right. During my own chemo, I had the weirdest cravings, mainly for sirloin steak and bacon sandwiches. I ate SO many bacon sandwiches.

Chemo was weird. I decided to have the port instead of a Hickman line mainly because I loved going swimming, and I wouldn’t be able to get a Hickman line wet. I also had to have blood tests once a week before school. When it came to having chemo sessions, I would always make sure I did a cartwheel first before they hooked me up to a drip for six hours! Of course, you can’t do cartwheels once you’re hooked up to a chemo drip.

One of my funniest memories was when my friend came to visit me. Obviously her mum had said something to her beforehand along the lines of – “be prepared, she’ll be lying in bed and she’ll look really ill”. Anyway, she comes onto the ward and the first thing she sees is me flying towards her on a drip! Hospital drips have large bases with wheels on them, meaning it’s possible to stand on them and get pushed along! When she came in, I was in the middle of a race against one of the nurses whilst another nurse was wheeling me along across the ward!

Afterwards was the worst part of chemo – not during – you just feel steadily more and more tired. Sometimes I wouldn’t eat for two or three days because I’d just throw it straight back up, so I also lost quite a bit of weight too.

School was very accommodating during my treatment. For lunch they’d make me a bland alternative such as a cheese sandwich instead of a tuna one, because otherwise it would make me feel sick. I could also leave lesson early if I was feeling unwell and someone would come along with me to make sure I was ok. I also spent a lot of time in hospitals, having to go back frequently if I got infections due to my platelet count being really low. So, if I walked into a table, I’d immediately have a bruise. I was black and blue all the time!

Due to the risk of infection and needing immediate medical attention, we all stayed in the UK during my treatment, choosing to holiday at my grandparents’ house in Southampton during the summer. I think back on that time and remember it being an awesome summer actually, even though we had to go to Southampton Hospital fairly regularly whenever I got an infection.

Losing my hair
Chemo was pretty bad, but not completely horrible. At least my hair loss turned out to be good for Halloween where I went as Golum! That was an awesome costume and hands down the best one I have done to this day.

The Little Princess Trust gave me a really cool wig made of real hair that looked just like my own original hair. However, I didn’t really like the feel of wearing wigs, they just didn’t seem like they were mine. So, I chose to wear a headscarf instead.

Fast forward to four years later when I ended up having all my hair cut off again, which I then donated back to the Little Princess Trust. I also raised around £4,000 for the charity and had a stylish buzzcut as a result.

When I had finished chemo and my hair started to grow back, I got the infamous ‘chemo curl’ which everyone had been telling me about – basically I had an afro for half the year which then eventually grew out. It looked good though with my own natural highlights showing through, it looked so awesome and healthy!

Chemo didn’t really stop me from doing anything – maybe for the couple of days each time immediately after a chemo session – but I kept up my gymnastics, football, netball, swimming, everything I had done originally. I didn’t really like having to stay indoors all day feeling like a sick patient – it was so boring.

I had my last chemo in December of that year when I was ten years old.

Some unfortunate news
A couple of months later, the hospital got in touch to say that they wanted to see me. I went in and sat down and they told me that the chemo, which I had to try and save my eye, hadn’t worked as well as they had originally hoped. They told me that I was going to have to lose my eye.

And I was like “oooh ok”. I wasn’t that phased to be honest, because I thought there was a chance that they were going to tell me that I might die. So, when they said I was going to lose my eye, I was almost relieved – I thought it was going to be so much worse.

My parents’ reactions were what hit me the most. I was ok with the fact that I was going to lose an eye, but my mum was in tears. My older sister Grace asked if I would be able to cry properly with an artificial eye. And I was like – “I actually have no idea”! Turns out they leave the tear duct in so I wouldn’t lopsidedly cry! Grace was great. She didn’t want to treat it like it was something to get upset about. She was always like ‘oh that’s so cool’.

Throughout my Rb journey, all the medical staff I’ve spoken to always made sure to involve me in everything. They never looked past me and spoke only to my parents – they talked to me directly, asked me questions – what I thought, how I felt. That was so helpful because it made me feel that I wasn’t being blindsided by anything, and of course, my parents always spoke to me about what happening too.

I was nervous, but then the hospital staff showed me pictures of people who had artificial eyes – asking me if I could tell which one of their eyes wasn’t real. I think I got one correct out of about five. At that point I knew it wasn’t going to be that bad, and that they were going to make me an eye that looked realistic.

The first thing I remember when I woke up after the operation, was one of the Rb staff bringing me Double-Stuffed Oreo biscuits. I had a huge bandage on, which they took off the day after to reveal a temporary artificial eye which was bright blue with a hole in the middle. It was so cool!  At this moment I thought – now I have something which makes me unique to everyone else, which wasn’t a bad thing at all.

Life with an artificial eye
In the end my artificial eye did take a couple of tries to get perfect, but the one I have at the moment is really great. I also have a rainbow coloured one which I’ve worn at special occasions like Halloween and Pride last year. I have a bunch of different eyes around the house somewhere.

Having an artificial eye hasn’t disadvantaged me in anyway. Except, maybe trying to do winged eyeliner – but I’ve even mastered that now! I do tend to joke about it, and not shut it down, which relaxes people and makes things easier. I’m also looking forward to learning to drive soon and I’m starting to consider my options for uni in a couple of years’ time.

Unfortunately, my friend’s mum later had an accident where she ended up having to have an artificial eye. I was able to talk to her about my own experiences with mine, everything from how I do my makeup to what life is generally like.

If anyone does notice my eye, they just assume I’ve got two different coloured eyes and they think that’s cool. Obviously I have moments when I just hate it and feel paranoid that everyone is thinking about my eye – but then I talk to my friends who are genuine when they say that they didn’t even realise I had an artificial eye when they first met me, and they certainly don’t notice it now.

My advice to others who have gone through Rb or who have an artificial eye, is not to worry about what people think – people don’t notice it as much as you think they do. You build it up in your head that it’s terrible, but it really isn’t.