Mum urges parents to be more aware of retinoblastoma

A mum is calling for more parents to be aware of retinoblastoma after her young daughter had to have her eye removed to save her life.

Nya Yasmin Ali was 18 months old when she was diagnosed with retinoblastoma (Rb), a fast-growing cancer that affects babies and children. Just two days later she had surgery at the Royal London Hospital in Whitechapel to remove her right eye.

Nya was a typical toddler who was constantly running around bumping into things and so her mum, Nia Delpratt, didn’t think anything of it. What she didn’t know was that Nya had a tumour growing in her retina, which had made her blind in one eye.

Nia, 19, from London, says: “I now know that Nya couldn’t see out of one of her eyes, probably for some time, but I had absolutely no idea and she had no symptoms that would even suggest that she had cancer.”

Now Nia has teamed up with the Childhood Eye Cancer Trust to warn parents of the signs and symptoms of Rb. They include: 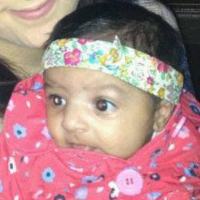 Nia saw a white glow in photographs of Nya.

Nia found out about her daughter’s condition by chance. Nya was born with a club foot and was in hospital having a routine check up when the doctor noticed that she had an unusual glint in her eye. The very next day, Nya’s eye was red and puffy so her mum called the GP.

Nia says: “I assumed it was conjunctivitis and the doctor thought the same, but he referred us to an eye specialist. While we were waiting for the appointment Nya’s eye continued to get worse. I did my own research online and read about Rb. I’d never heard of it before but the more I read, the more convinced I became that Nya had it. I started looking back at old photos of Nya and I could see the white glow in her eye. That’s when I began to panic.”

Nia took her daughter to an optician who sent her to the local hospital that day. By the following morning she was at the Royal London Hospital, one of the two specialist centres for Rb in the UK. Further tests revealed that Nia had cancer and the only way to save her life was to remove her eye as soon as possible.

Nia says: “I was devastated. I couldn’t think straight and I couldn’t stop crying. Nya was too young to understand what was going on but she knew something was wrong and she cried every time a doctor went near her. It was the worst thing I have ever been through.”

The family had just 48 hours to take the news in before they had to return to hospital for the surgery. Nia says: “Although I was frightened, I didn’t hesitate to say yes to having Nya’s eye removed. It was what we had to do to save her life.” 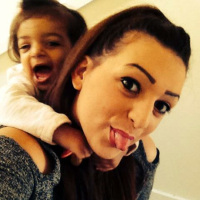 The surgery went well and fortunately the cancer hadn’t spread. Nya was fitted with an artificial eye and still has to go to hospital for regular check ups but she’s doing well. Nia says: “Nya has been so brave despite everything she’s been through. She’ll be three in March and she’s a happy little girl who enjoys going to nursery and playing with her friends. But I can’t believe that she had cancer and was slowly losing her vision, and I had no idea.”

Patrick Tonks, Chief Executive of CHECT, says: “Every week one child in the UK is diagnosed with retinoblastoma but very little is known about this condition and quite often the child seems happy and well, so it can be hard to know when something is wrong.

“We want all parents to be aware of the possible signs and symptoms. While Rb is rare and these can also indicate other, less serious, conditions we urge parents who notice anything unusual to get their child checked out by a GP or optician as soon as possible.

“Retinoblastoma can be successfully treated and more than 98% of children in the UK will survive but early diagnosis is essential in order to save a child’s eyes, sight and life.”