“My daughter’s eye looked like a cat’s eye or a marble in the light – I knew there was something wrong.”

A mother of identical twins was shocked to learn that a strange ‘glow’ in one of her daughter’s eyes was actually retinoblastoma. 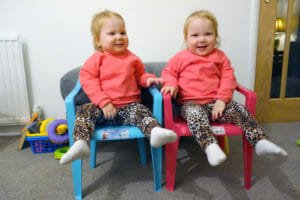 Identical twin Indiana was diagnosed with retinoblastoma (Rb) when she was just under four months old.

After a visit to a health visitor, everything was believed to be fine with the twin girls. However, when Indiana was sitting on the sofa one day, mum Alison noticed the dim light reflecting oddly in her little girl’s eye.

Alison, from South Croydon said: “Her eye looked like a cat’s eye or a marble – but only in a certain light. I first noticed it when she was sitting near the TV, but we later went shopping in H&M and I saw it again. I thought it was odd so got it checked out by a GP. Looking back, I also remembered seeing something online about a ‘white eye’ being linked to cancer.”

Alison added: “I feel terrible now – but before she was diagnosed, my husband and I were joking that Indiana looked a bit cross-eyed, which we did check with the health visitor and were reassured all was fine.”

Another sign of Rb is a squint – where the eyes point in different directions.

Worried, Alison and her husband Jerome took Indiana to her GP. A junior doctor examined Indiana’s eyes by conducting a red reflex test, which was then replicated by a GP. A referral was made to Moorfields Eye Hospital in London.

With the results playing on her mind, Alison then called the hospital to make sure they had received the referral – they hadn’t. Moorfields advised that Indiana could be seen in their children’s A&E department straight away. It was there that they did an ultrasound and confirmed Alison and husband Jerome’s dreaded suspicions – Indiana had cancer.

Alison said: “On top of the stress of being a new mother and learning to cope with twins – to hear the news that one of them has cancer, is absolutely terrifying. You never think it will happen to you – it’s always someone else’s child you hear about – never yours.”

Alison said: “I urge all parents to look out for the signs of Rb – which can include a squint or a white glow in the eye – and keep pushing their doctor if they feel something is not right. Despite being a rare disease, I also feel really lucky that it was caught early enough.”

Indiana had non-heritable unilateral Rb, but her identical twin sister Aurelia is also currently being monitored for signs of Rb as a precaution.

Much to everyone’s relief, Indiana’s cancer has responded well to chemotherapy, her tumour has shrunk and her check-ups are getting further and further apart.

Alison added: “We’re now spending periods of time covering her good eye with an eye patch to try and improve the vision in her other eye – however she’s now sneakily discovered how to remove it! Indiana is certainly the rowdier of the two – I can imagine she’ll be the one getting her sister into trouble when they’re older!”

Retinoblastoma is a fast-growing cancer that affects young children, mainly under the age of six, and early diagnosis is essential in order to save a child’s eyes, sight and life. Sadly, more than half of children will have an eye removed to stop the cancer spreading.

Today, to mark Rare Disease Day (28th February) the Childhood Eye Cancer Trust (CHECT) is urging parents and healthcare professionals to be aware of the symptoms and spread the message that ‘just because it’s rare, doesn’t mean it isn’t there’.

Patrick Tonks, Chief Executive of the Childhood Eye Cancer Trust, said: “Retinoblastoma is rare, with around 50 cases diagnosed in the UK each year, so many doctors will never come across it in their career. In addition to this, the symptoms can be quite subtle and children often seem well in themselves which makes it hard to diagnose. Unfortunately this can lead to alarming delays and we know that early diagnosis can potentially offer more treatment options and a better outcome for the child.”

The CHECT’s Pathway to Diagnosis Information* shows that the two main symptoms of retinoblastoma parents have reported are a white glow in a child’s eye, seen in dim lighting or when a photo is taken using a flash and a squint, where the eyes do not look in the same direction. Healthcare professionals should carry out a red reflex test on any child showing these symptoms in order to rule out cancer. This is a simple, non-invasive test which is done using a medical torch in a darkened room to check the retina at the back of both eyes. If eye cancer is suspected, an urgent referral should be made (within two weeks), according to the NICE guidelines.